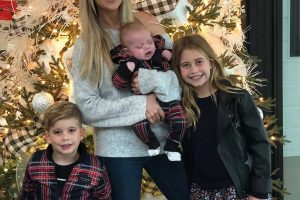 Taking family photos is never easy — especially when you have a newborn!

Christina Anstead spent time with her family on Thanksgiving, celebrating the holiday with her children, as well as her husband Ant Anstead.

Documenting the occasion, the mother of three shared a pair of candid Thanksgiving shots, in which Hudson seemed to struggle with keeping his eyes open.

In one photo, all three of the Christina on the Coast and Flip or Flop star’s children pose underneath the Christmas tree as Taylor snuggles up to her baby brother, who was busy letting out a wail. Another shot showed the proud mama cradling her newborn in her arms while standing beside Taylor and Brayden. Just like in the first photo, while her eldest children have no problem smiling for the camera, her youngest has his eyes closed.

“Thankful ♥️ (and the best I could get) 😂,” she captioned the family snapshots.

Later on, Christina reflected on how Thanksgiving was a lot to handle this year.

“Hosting thanksgiving with a two and half month old and 20 people plus four crazy dogs was no joke,” she said in a video posted on her Instagram Story. “But you know what, we survive. Memories.”

Ant also documented some of the night’s highlights on his own Instagram Story, including a game of hide and seek with Brayden.

Missing out on the festivities was El Moussa, who has been on a European vacation with girlfriend Heather Rae Young.

RELATED: Ant Anstead Says He and Wife Christina Have a “Weird Synergy”: “I’m Just Happy Being with Her”

Just last month, Christina celebrated Halloween alongside El Moussa, with whom she stars on Flip or Flop, and their children, going trick-or-treating with them, Ant, Christina’s parents and El Moussa’s girlfriend.

“It was a lot of fun — we took the kids out and it was the first time we all got together,” El Moussa, 38, told PEOPLE exclusively of the gathering. “I was Marshall from PAW Patrol and then Brayden matched me. So, we were out there cruising together as twins.”

The last time the former couple came together was for Taylor’s ninth birthday in September, when El Moussa also brought Young, 32, along for the party.

He and Christina hadn’t yet decided if they would bring everyone back together again for the upcoming holiday season, El Moussa told PEOPLE at the time.

Four weeks after he and Christina welcomed baby Hudson, Ant spoke with Entertainment Tonight about their secret to blending families successfully: make the kids the priority.

“If everybody wants the same thing, and that has to be kids first. If you prioritize kids first, it actually kind of falls into place and the rest of it makes sense,” he continued. “If you ever make a decision that doesn’t put the kids first, it is the wrong decision.”

Tim Robbins on How Proud He Is of His Kids &amp; How He Wants to Be the 'Mischievous Grandfather'