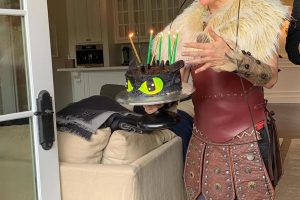 The party may have been How to Train Your Dragon-themed, but Jennifer Garner is now learning how not to embarrass your child!

On Thursday, the actress shared a sweet photo on Instagram from her son Samuel‘s movie-inspired 7th birthday party.

In honor of the bash, Garner, 46, dressed up as Astrid from the animated film, wearing blue and orange face paint, a fur shawl, arm sleeves, a pointy, leather skirt with leggings underneath, and fur boots.

But as she went to present her son with a chocolate cake featuring the dragon Toothless’ eyes around the edges, Garner found out the hard way that her son was already becoming embarrassed.

“Well, guess what. It turns out 7 is the age my kid stops thinking it’s cool when I dress up for the party,” she captioned the happy photo.

Garner jokingly added in the hashtags that her youngest child had his “first eye roll” at the party and even asked her followers, “anyone need an Astrid?” along with a facepalm and Grandma emoji.

She also tagged America Ferrera in the post, who voiced the character of Astrid in the animated drama/fantasy.

In response, Ferrera commended the Camping star for her efforts. “Ahhhh!!!! Yeeeeessss!!! AMAZING @jennifer.garner as ASTRID!!” she wrote in support over the original post on her Instagram Stories.

Though Samuel may be too cool for his mother in a party costume, he’s definitely not about to pass up some snuggles.

The mom-of-three — she and ex-husband Ben Affleck also share daughters Seraphina Rose Elizabeth, 10, and Violet Anne, 13 — recently revealed to PEOPLE that she always spends some quality time with her only boy before bedtime.

“I sang to my son last night. I sing putting them to bed every night,” Garner said, adding that her tune of choice would make Kermit the Frog proud.

While the former Alias actress is certainly busy in her flourishing career, she always makes time for her kids — in fact, her routine with Samuel is a “part of every night.”

“My son is the last one little enough to still be sung to, although I will whip it out for the others if I feel like they can use a little soothing,” Garner said.

“We’ve read, the lights are out, he’s folded up on me, there’s a favorite blanket, he’s on my lap and I rock him and sing ‘Rainbow Connection,’ ” explained Garner.

“It’s so soothing,” she added. “There’s no better feeling than a little kid in your lap while you rock him and sing to him.”

How to Talk to Your Kids About the Power of Voting