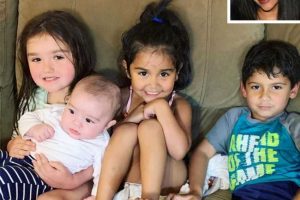 The next generation of guidos and guidettes are ready to get their GTL (gym, tan, laundry) on!

While celebrating her baby sprinkle on Saturday, Nicole “Snooki” Polizzi, who is expecting her third child, shared a sweet photo of (almost) all of her Jersey Shore costar’s children.

In the photo, Polizzi’s lookalike daughter Giovanna Marie, 4½, smiled while sitting between her brother Lorenzo Dominic, 6, and their BFF Meilani Alexandra, 4 — who is the daughter of Polizzi’s bestie Jenni “JWoww” Farley and ex Roger Mathews.

Adding an extra dose of cuteness to the image: Deena Cortese‘s 3-month-old son Christopher John also made an appearance, as Meilani cradled the newborn in her lap.

The soon-to-be mother of three went on to share another image of her and Farley’s daughters smiling as they sat next to one another at the bash.

“BESTIES,” she wrote alongside the shot.

During the shower, Polizzi also shared a sweet moment with Cortese, 32, as the pair posed together with their mini-mes.

“All the meatballs,” Cortese captioned a pair of snaps, making a loving reference to her shared nickname with Polizzi.

Following the celebration, Polizzi thanked all of her friends and family for making the day so special for her and baby Angelo.

“Had such an amazing sprinkle! My family did amazing spoiling baby Angelo!” she wrote alongside an image of herself cradling her baby bump and posing alongside a blue-tiered cake.

“Thanks to my mawma @stephanie_b22 for baking this delicious cake for me! I’m a lucky girl #BabyAngelo,” she added.

After announcing in November that she and husband Jionni LaValle were expecting a sibling for Giovanna and her big brother. Polizzi revealed the following month that the couple will be welcoming a boy.

The reality star surprised fans in mid-April by sharing the name of her son, who is expected to arrive in June.

While thanking Cortese for some baby gifts, Polizzi showed off the personalized teddy bear security blanket, piggy bank and a fleece throw blanket she’d received — all with the name “Angelo” printed on them.

“Look what Deena got me!” said the reality star and fashion designer, before confirming the moniker: “So you guys know the name, it’s gonna be Angelo.”