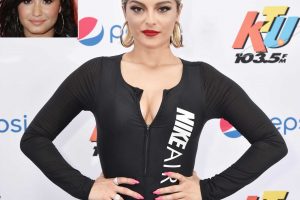 Bebe Bexha lashed out at Instagram trolls on Thursday, after some followers called her ‘tubby’ and body shamed her for posting a photo on social media — but fellow songstress Demi Lovato had her back.

Bexha has previously spoken out about body positivity, and Thursday was no different when the “Say My Name” singer fired back at trolls calling her ‘tubby’ and criticizing her weight under the comments section of a photo she had posted to Instagram.

“To all the people tweeting mean things to me about my weight you just want a response and you will not get it,” the 29-year-old tweeted in response to the trolling.

“Unless you are completely perfect you have no f***** right to talk about anybody else’s body. The hate you breed that stems from Insecurity don’t look pretty on you.”

“You are GORGEOUS, strong, authentic and an inspiration to me and so many,” Lovato wrote. “Thank you for being you you BEAUTIFUL, beautiful woman. I love you.”

Earlier this year when she was nominated for two Grammys, Rexha said none of the big designers or showrooms wanted to dress her because she was ‘too big,’ Metro UK reported at the time.

“I am a UK size 12, I like my curves,’ she revealed. ‘It hurt me because I’ve struggled with my weight all my life, especially being in the music business, looks are an important thing but you also want to be healthy.”

Lovato, 26, has also been the target of repeated body shaming, and often speaks about the importance of body positivity.