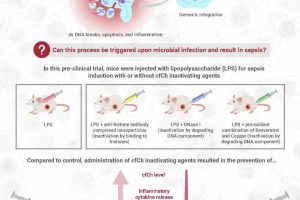 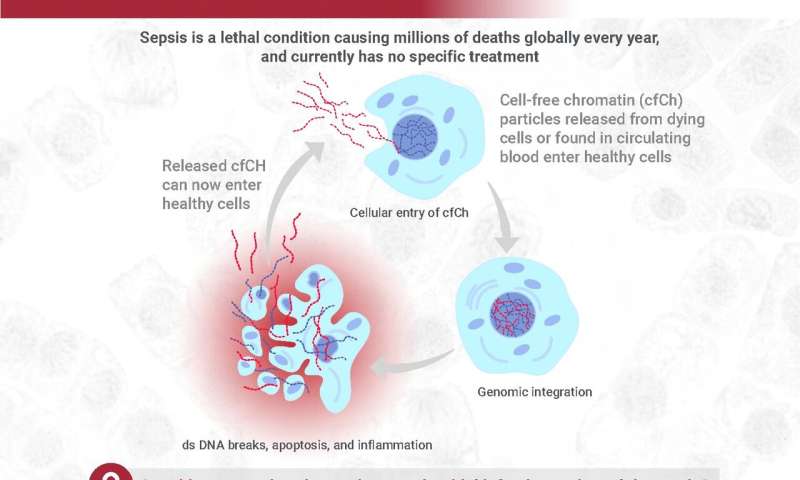 Sepsis—the body’s own immune response gone against it—is a major health problem worldwide. It is basically a “hyper” immune response by the body to infection or injury, and is characterized by hyperinflammation, immune system paralysis, cell death, liver and kidney failure, blood clots, and even hemorrhage.

An estimated 30 million people suffer from sepsis every year, of which 20% die. This incredibly high mortality rate, combined with a poor understanding of how sepsis occurs and lack of effective remedies, means that we need to considerably improve our understanding of sepsis onset and devise novel strategies to treat it. Now, in an important new study, scientists at the Advanced Centre for Treatment, Research and Education in Cancer, Tata Memorial Centre in India, have made significant strides towards devising a novel therapeutic modality for sepsis.

DNA in our cells is stored as tightly packed units called “chromatin,” which includes complexes of histone proteins and DNA. Prof Mittra says, “We previously showed that chromatin particles released from dying cells, into the bloodstream—called cell-free chromatin (cfCh)—can integrate into the DNA of healthy cells and disrupt it, causing cell death and inflammation.” In the latest study, the scientists made a hypothesis that sepsis could possibly be caused by cfCh integrating into and disrupting the DNA of healthy cells; which, according to Prof Mittra, “then causes them to die and release more cfCh, thereby sparking off a terrifying ‘cascade’ of sorts that leads to more host cell death, thus leading to sepsis-related pathologies.”

To test this hypothesis, the scientists first prepared compounds that would “inactivate” cfCh, including (a) anti-histone antibodies complexed with nanoparticles (CNPs) that target the histones in cfCh; (b) DNase I, which attacks DNA component of cfCh; and inactivates it and (c) a novel pro-oxidant combination of resveratrol (a plant antioxidant) and copper, called R-Cu2+, which also degrades DNA in cfCh via the medium of free radicals. Simultaneously, they induced sepsis in mice by injecting varying doses of a bacterial endotoxin called LPS.

While they injected only LPS in one group of mice, they injected each of CNPs, DNase I and R-Cu2+ in the other groups. The scientists wanted to check if the cfCh-inactivating agents could reduce sepsis/death caused by LPS in the mice. And for this, they specifically looked at the following parameters: levels of cfCh in extracellular spaces in organs and circulation, levels of “pro-inflammatory cytokines” (signaling molecules that trigger cellular events related to inflammation), DNA damage, cell death, and inflammation in the thymus and spleen (indicative of immune system failure, a classic sepsis sign), and other vital organs (lungs, brain, heart, small intestine), liver and kidney damage, coagulopathy and fibrinolysis, and death.

And what the scientists found was unprecedented: all the three cfCh-inactivating agents were effective in ameliorating all the parameters related to sepsis, which were initially increased by LPS. The effects on survival were the most notable. When the mice were given potentially fatal doses of LPS, only 10% mice in the LPS-only group survived; however, among the treatment groups, R-Cu2+ and DNase I increased the survival rate drastically, to 50%, while CNPs increased it to 30%.

All these findings validated their hypothesis: one of the ways in which sepsis is caused is indeed the integration of cfCh into healthy host cell DNA and subsequent DNA damage, apoptosis, and inflammation, which triggers a vicious cycle and a chain reaction of further apoptosis and inflammation.

Prof Mittra is encouraged by these findings, as he says, “Prior studies have shown increased levels of cfCh in the serum of sepsis patients. Our previous studies have shown that inflammation is caused by cfCh integration and its associated DNA damage. Our new findings suggest that previous clinical trials for drugs to treat sepsis might have failed because the drugs attempted to treat the symptoms of inflammation rather than attacking the root cause, which is integration of cfCh into DNA of healthy cells and disruption of DNA.”

The promise of this study is not limited to research and treatment of sepsis. Prof Mittra adds, “Our group has also previously shown that the toxic side effects of chemotherapy stem from cfCh generated by healthy cells that are killed by the drugs; this creates a similar vicious cycle of more cell death that underlies the toxicity of chemotherapy.”

Prof Mittra concludes, “This study has now highlighted that the inexpensive resveratrol + copper combination is a highly effective cfcH-inactivator. Although the current study is a pre-clinical study, we at Tata Memorial Centre have started Phase 1 and Phase 2 clinical trials in cancer patients on chemotherapy based on these findings. A proposed trial on sepsis patients has received approval from our Institutional Ethics Committee.”

The fitness industry is overwhelmingly white – and that needs to change

How does coronavirus compare to SARS and to the common cold?
and, Destroying, DNA, genome—study, Insights, into, It's, new, offers, save, Sepsis, the, to, treatment
Latest Posts