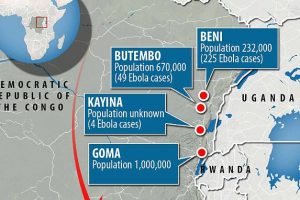 Ebola heads for major city: Outbreak in the Democratic Republic of the Congo which has killed 419 people is moving towards a trading hub home to one million inhabitants

The deadly Ebola outbreak in the Democratic Republic of the Congo is spreading towards a city home to one million people.

Cases have begun appearing in a district between the two major cities involved in the epidemic, suggesting the virus is spreading south.

If Ebola does make it to the major city of Goma then ‘all bets are off’ for the bid to control the outbreak, one health official said.

A total of 419 people have died in the killer outbreak already, with the DRC’s health ministry reporting 685 cases. 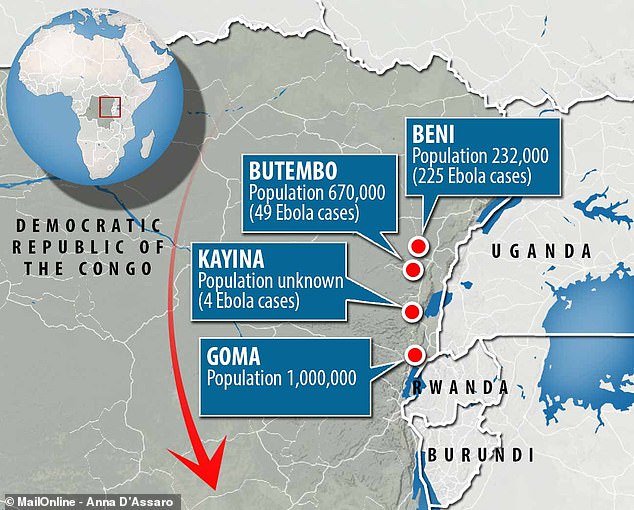 Experts fear Ebola is spreading south from the smaller cities of Beni and Butembo, where most of the outbreak has taken place so far, to Goma, which has a population of one million people and is close to the border with Rwanda 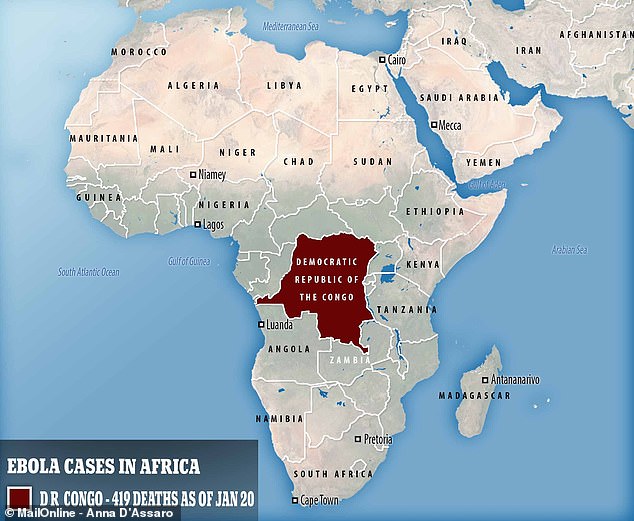 A total of 419 people have now died of Ebola, the Democratic Republic of Congo’s health ministry tweeted yesterday. There have been 685 cases of the illness which began in August

The health ministry reported on Friday that there had been four Ebola cases confirmed in the town of Kayina.

The area is halfway between the cities of Butembo, where people are already dying of Ebola, and Goma, where experts fear it could wreak havoc.

Goma has almost double the population of Butembo, meaning there is a much higher potential for the virus to spread quickly.

And Goma sits on the border with Rwanda, adding an extra threat of Ebola spreading out of the country.

He said the contagious illness spreading in areas where people are constantly travelling in and out ‘raises the alarm’.

The WHO and DRC’s health ministry have already sent rapid response and vaccination teams to Kayina, and they’ve set up a lab in Goma as a precaution.

More than 60,000 people have been vaccinated against the virus already, in an outbreak which is the second worst in world history.

More than 60,000 people have been given an experimental vaccine to protect against the Ebola virus (pictured, a woman being vaccinated in Mangina, North Kivu)

Vaccination has helped to slow the spread of the virus, experts say, but ongoing violent conflict, political protests and distrust of medical workers makes it particularly difficult to control.

Aggressive protests since a controversial election in December – which the losing party claims was rigged – continue to endanger patients and health workers.

Experts predict the country has months more suffering in store before the outbreak comes to an end.

But this could be longer if the illness breaks out of the North Kivu region, in the country’s north-east, where it has so far been contained.

Violent political protests surrounding a controversial election in December – which the losing party has claimed was rigged – have put health workers and Ebola patients in danger of attack (Pictured: A crowd of protestors wait to cast their votes in Kinshasa, the capital city)

Families cannot be near or touch their relatives who have died of Ebola because the virus, which is spread through bodily fluids, can still be passed on after death

Writing in Foreign Policy last week, Ebola expert Laurie Garret said: ‘Were Ebola to reach [Goma], a top WHO official told me, “all bets are off,” for stopping the epidemic.’

And she added: ‘If Ebola hitchhikes its way in an unwitting human carrier across Lake Edward into Uganda, down the highway to Goma and Rwanda, or up the Semliki River toward South Sudan, the world community will face tough choices.

‘Option one: Keep on muddling through with the tools, personnel, and funding that have carried the response to date.

‘Option three: Dedicate massive financial resources to pushing Merck and other vaccine-makers to rapidly manufacture millions of doses, and deploy literal armies, acting as security alongside an enormous public health deployment to immunize tens of millions of people in the region.’

WHAT IS EBOLA AND HOW DEADLY IS IT?

Ebola, a haemorrhagic fever, killed at least 11,000 across the world after it decimated West Africa and spread rapidly over the space of two years.

That epidemic was officially declared over back in January 2016, when Liberia was announced to be Ebola-free by the WHO.

The country, rocked by back-to-back civil wars that ended in 2003, was hit the hardest by the fever, with 40 per cent of the deaths having occurred there.

Sierra Leone reported the highest number of Ebola cases, with nearly of all those infected having been residents of the nation.

WHERE DID IT BEGIN?

An analysis, published in the New England Journal of Medicine, found the outbreak began in Guinea – which neighbours Liberia and Sierra Leone.

A team of international researchers were able to trace the epidemic back to a two-year-old boy in Meliandou – about 400 miles (650km) from the capital, Conakry.

Emile Ouamouno, known more commonly as Patient Zero, may have contracted the deadly virus by playing with bats in a hollow tree, a study suggested.

HOW MANY PEOPLE WERE STRUCK DOWN?

Figures show nearly 29,000 people were infected from Ebola – meaning the virus killed around 40 per cent of those it struck.

Cases and deaths were also reported in Nigeria, Mali and the US – but on a much smaller scale, with 15 fatalities between the three nations.

Health officials in Guinea reported a mysterious bug in the south-eastern regions of the country before the WHO confirmed it was Ebola.

Ebola was first identified by scientists in 1976, but the most recent outbreak dwarfed all other ones recorded in history, figures show.

HOW DID HUMANS CONTRACT THE VIRUS?

Scientists believe Ebola is most often passed to humans by fruit bats, but antelope, porcupines, gorillas and chimpanzees could also be to blame.

It can be transmitted between humans through blood, secretions and other bodily fluids of people – and surfaces – that have been infected.

IS THERE A TREATMENT?

The WHO warns that there is ‘no proven treatment’ for Ebola – but dozens of drugs and jabs are being tested in case of a similarly devastating outbreak.

Hope exists though, after an experimental vaccine, called rVSV-ZEBOV, protected nearly 6,000 people. The results were published in The Lancet journal.