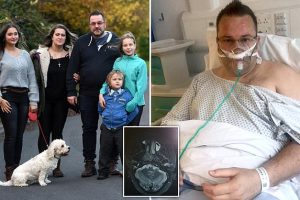 Father, 42, is diagnosed with a rare nose cancer that is attacking his skull after dismissing his symptoms as a cold

A father-of-three who dismissed his hearing problems as a cold for more than two years was eventually diagnosed with a rare nose cancer that is ‘invading his skull’.

Ben Wilkinson, 42, from Longlevens, Gloucester, lost his hearing in his right ear in 2016, which he put down to his frequent colds.

It was not until his GP recommended an MRI scan following a routine hearing test in September last year that doctors discovered the shift manager had a 4cm tumour behind his nose at the base of his skull.

Mr Wilkinson was diagnosed with adenocarcinoma and underwent a gruelling two-and-a-half hour operation in May to remove the tumour.

But due to the mass being situated close to critical nerves, only part of it could be taken out.

Mr Wilkinson has been told he could have radiotherapy to reduce the growth, however, this can damage healthy surrounding tissue, leaving patients unable to swallow, see or hear.

The NHS has turned down his application for more precise proton beam therapy, despite doctors saying there is a 50 per cent chance his cancer will return without it. 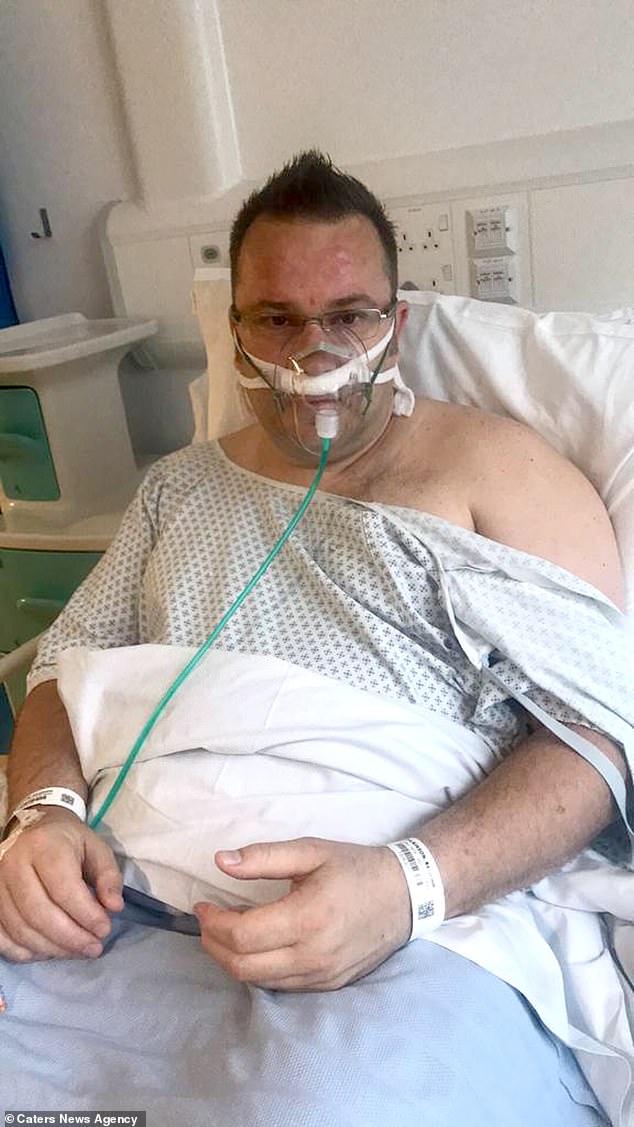 Ben Wilkinson dismissed his loss of hearing as a cold for more than two years. It was not until his GP recommended an MRI scan following a hearing test that he was diagnosed with a rare cancer behind his nose. He is pictured after surgery to remove part of the growth 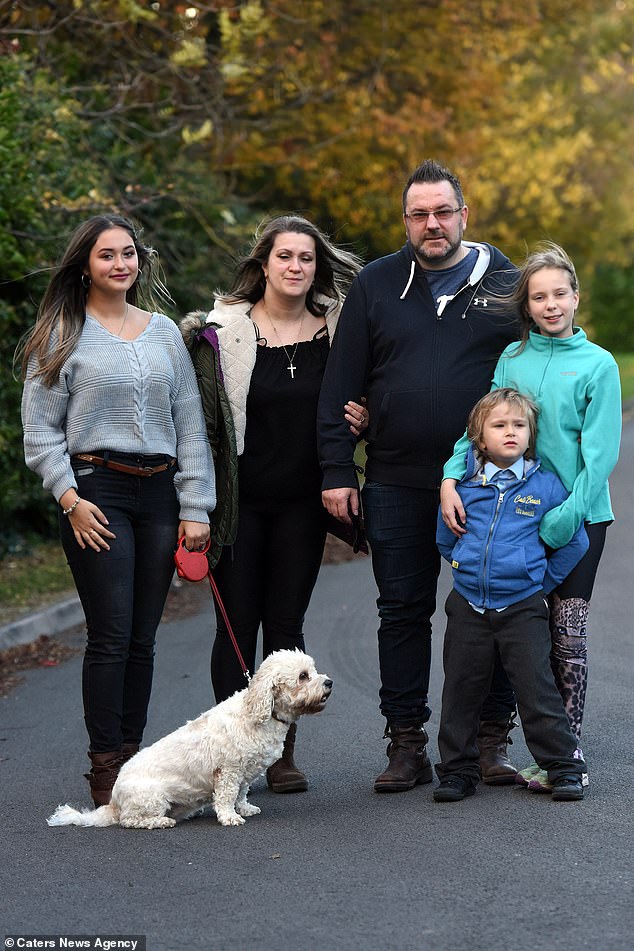 Despite being diagnosed in September, Mr Wilkinson only told his children last week that he is ill. Pictured left to right is his step daughter Ella, 16, wife Bozena, 43, daughter Lily, 11 and son Eli, five. His tumour is situated too close to his critical nerves to be removed completely 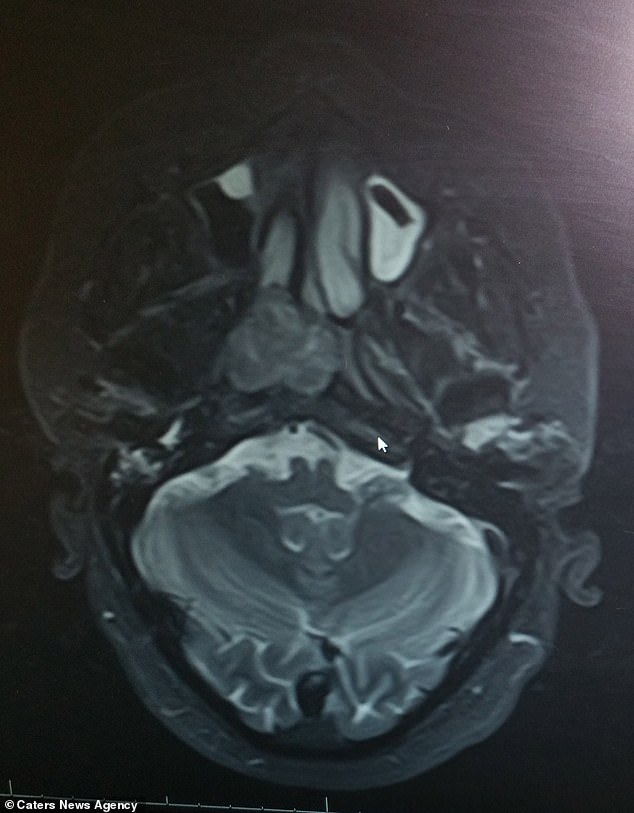 An MRI scan showed he has a tumour behind his nose at the base of his skull. This was pushing on a tube in Mr Wilkinson’s middle ear, which was affecting his hearing. Surgery to remove part of the tumour boosted his hearing by 85 per cent but there is a 50 per cent the mass will return

Speaking of his initial symptoms, Mr Wilkinson said: ‘I always had problems with my hearing. Every time I got a cold, my right ear got affected but I never thought anything of it.

‘I had been to the doctors but as I always had a cold it was dismissed as mucus from the cold.

‘I was referred to an ENT from my GP at my employers request as I had low results in my annual hearing tests for two years. It always seemed like I had a cold when I had the tests.’

Mr Wilkinson then underwent an MRI scan that revealed his tumour.

‘I was devastated when doctors told me it was a very rare type of cancer, so rare there was barely even a name for it,’ he said.

‘To make it worse, it was my daughter’s 16th birthday the same day.

‘We only told our kids a week ago. I said to my wife that we need to tell them, I didn’t want them to find out any other way.

‘We tried to comfort them and told them “daddy is going to be okay”.’

Despite putting on a brave face, radiotherapy to treat the cancer could leave Mr Wilkinson deaf, while leaving it may be fatal.

‘The cancer is invading my skull, and the tumour is very close to critical nerves linked to the communication system,’ he said.

‘I am still young, I have a family and I want to be able to spend time with my kids.’ 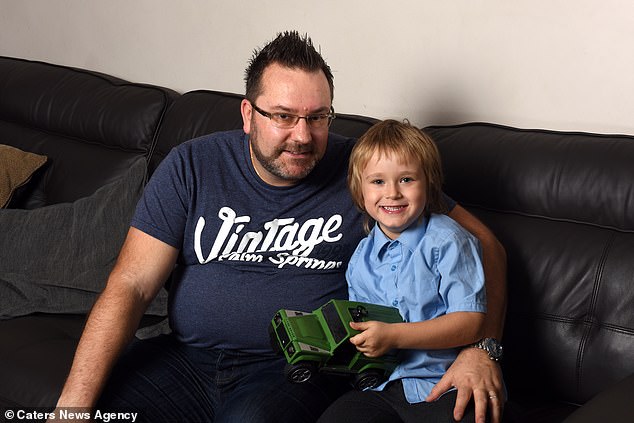 Mr Wilkinson (pictured with Eli) has been told the cancer is ‘invading his skull’. Although radiotherapy could treat the tumour, it often also damages healthy tissue, leaving patients unable to see or hear. ‘I am still young, I want to be able to spend time with my kids,’ he said 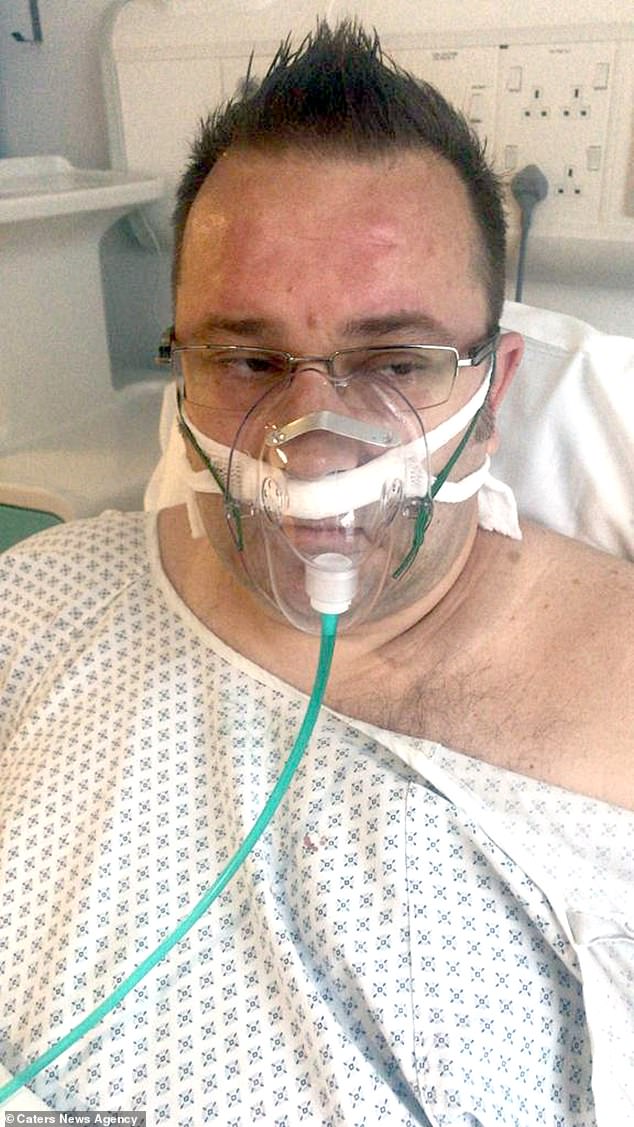 Pictured after surgery to remove part of the growth, it was then doctors told Mr Wilkinson he had adenocarcinoma, which his surgeon had seen three times in 20 years. Mr Wilkinson applied for proton beam therapy, which targets the tumour, on the NHS but was turned down

In May this year, Mr Wilkinson went under the knife with surgeons going through his right nostril in an attempt to remove the mass.

However, they discovered it was situated close to critical nerves linked to the brain’s communication system and the right carotid artery, which carries blood to the head and neck.

‘After my operation, the surgeon told me what I had was called “adenocarcinoma” and he had only seen three similar cases in 20 years,’ Mr Wilkinson said.

‘My hearing came back at 85 per cent as the tumour had been pushing on my eustachian tube, which was what had been causing the hearing loss.’

Adenocarcinoma is a type of cancer that affects the mucus-secreting glands found throughout the body.

It can occur anywhere but is most common in the:

Treatment varies on where the cancer grows in the body.

It may include surgery to remove the cancerous tissue.

Radiation and chemotherapy may also be used in combination with surgery.

Unable to remove the tumour, the medics discussed Mr Wilkinson’s other options, with one being proton beam therapy.

After doing his own research, Mr Wilkinson discovered this treatment is specifically intended to remove tumours in sensitive areas, such as the head or spine, without damaging any healthy tissues, unlike radiotherapy.

In August, Mr Wilkinson applied to the NHS proton therapy panel for funding after his oncologist told him he met all the requirements for the treatment.

But he claims the NHS declined his application on the October 17 and have since refused to tell him why despite his many calls and emails.

‘The only reason that I could see from my rejection letter was that they said it looked like maximal resection had not been achieved, which was one of the listed criteria,’ Mr Wilkinson said.

‘My surgeon had already confirmed he had taken out as much as he could without killing me.’

Mr Wilkinson and his wife Bozena, 43, are now fundraising to go to Prague to have proton beam therapy at a cost of £66,500 for 38 cycles over eight-to-ten weeks.

Without this treatment, Mr Wilkinson will be forced to undergo standard radiotherapy, which can affect the facial muscles, speech and eyesight.

‘I am just failing to understand why I am not a good fit for proton beam therapy,’ he said.

‘There are many long term complications with radiotherapy and I want the best treatment.’

An NHS England spokesperson said: ‘The NHS does fund proton beam therapy in this country and internationally where top doctors say it is advantageous, but it is not always clinically appropriate or a better treatment than other options already available on the NHS.

‘Together with the Department of Health and Social Care we are also now funding the development of two new world class PBT centres in Manchester which will open in 2018 and in London in 2020 to treat an estimated 1,500 cancer patients a year.’

The boy whose clumsiness turned out to be cancer