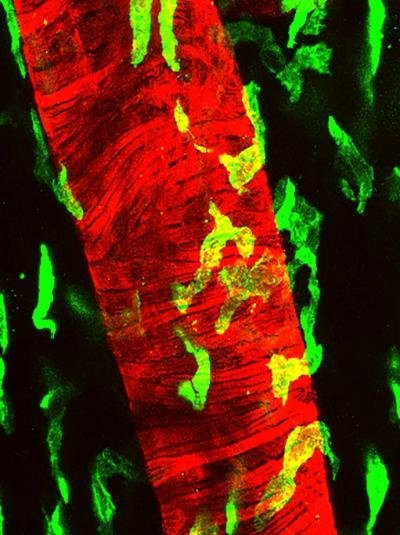 Arteries such as the aorta actively transport oxygenated blood, nutrients and cells throughout the body to keep our tissues functioning normally. Damage to the arteries can result in life-threatening cardiovascular diseases. A major type of damage involves hardening or stiffening of the vessel walls. This phenomenon, known as arterial stiffness, results in raised blood pressure and an increased risk of cardiovascular diseases such as atherosclerosis and aneurysm. However, the causes of arterial stiffness are still largely unknown.

A team of researchers at NUS Medicine, led by Associate Professor Veronique Angeli, has identified a population of cells called macrophages that coat the outer walls of healthy arteries and express a protein called LYVE-1. The researchers found that when these cells were absent, arteries accumulate collagen and lose their elasticity, becoming stiff and inflexible. These findings suggested that the macrophages protect our arteries from becoming stiff, a concept that the team proceeded to prove. They showed that the macrophages interact with another type of cell residing in the artery called smooth muscle cells, which produce collagen. The interaction between the two types of cell reduces the production of collagen by the smooth muscle cells.

Associate Professor Angeli and team showed that the LYVE-1 protein on the macrophages is actually responsible for this protective effect. LYVE-1 binds to a molecule called hyaluronan expressed at the surface of smooth muscle cells and this interaction is required for the degradation of collagen by an enzyme called matrix metalloproteinase 9 (MMP-9).