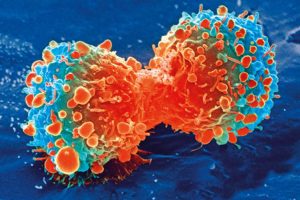 The results of the phase 3 CheckMate 9ER trial have provided a new first-line treatment option for patients with metastatic kidney cancer. The late breaking results are presented at ESMO 2020.

The trial took two drugs used as monotherapies in the second line, nivolumab and cabozantinib, and combined them for use as a first-line treatment against standard of care, sunitinib. The combination was superior to sunitinib for progression-free survival, overall survival, and response rate. There was a consistent benefit of the combination over sunitinib in numerous subgroups including age, sex, PD-L1 expression, bone metastases, International Metastatic RCC Database Consortium (IMDC) risk group, and region of the world.

Study author Dr. Toni K. Choueiri, Director, The Lank Center for Genitourinary Oncology, Dana-Farber Cancer Institute and The Jerome and Nancy Kohlberg Chair and Professor of Medicine, Harvard Medical School, Boston, US said: “The results with combination therapy were statistically significant and clinically meaningful. The risk of progression or death was cut by almost 50%, death was cut by 40%, and the response rate doubled. This will become an important treatment option to choose from. The various combination treatments will unlikely be compared head-to-head, but I think quality of life could differentiate this new therapy, as there was a statistical significance favouring the combination arm with both questionnaires we used. Another factor to consider is that clinicians are familiar with both of these drugs.”

Commenting on the findings, Dr. Dominik Berthold, Head, Specialised Consultation for Urological Cancers Medical Oncology Service, Department of Oncology, Lausanne University Hospital, Switzerland said: “CheckMate 9ER met its efficacy endpoints and the combination can be considered a new first-line treatment option. However, the medical community is divided about whether two immunotherapies or immunotherapy plus an anti-angiogenic drug is the better choice, since the different combinations appear to have similar effectiveness.”

He said longer-term data are needed for CheckMate 9ER: “The 18 months of follow-up is still quite short. The question is whether the responses to treatment are durable or patients progress at some point.”

“It would also be useful to learn whether the combination of cabozantinib and nivolumab is effective in non-clear cell carcinoma,” added Berthold. “This is a minority of patients with advanced kidney cancer which are not well studied and were excluded from this trial.”