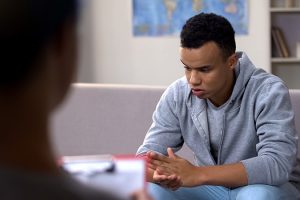 Although most psychiatrists have encountered patients who don’t improve with treatment, novel research sheds some light on one possible explanation for this phenomenon.

Investigators found that among patients who were “stuck” many believed that they didn’t deserve to get better and were significantly less likely to adhere to, or complete, a treatment program.

“To the best of my knowledge, this subject hasn’t been written about or explored before because we operate under the assumption that someone coming for ambulatory treatment, of course, wants to get better and thinks that they deserve to get better,” lead author Mark Zimmerman, MD, professor of psychiatry and human behavior, Brown University, Rhode Island, told Medscape Medical News.

“This issue is not something complicated that a clinician would need to explore by administering some scale or clinical rating instrument. All you have to do is ask patients if they think they deserve to get better, particularly patients who seem to be ‘stuck,’ and explore what’s underlying that belief,” added Zimmerman, who is also the director of the Outpatient Division at the Partial Hospital Program, Rhode Island Hospital.

The findings were published online June 8 in The Journal of Clinical Psychiatry.

When compared with their peers, patients who felt they were undeserving were significantly less likely to complete the treatment program and missed significantly more days of treatment while in the program.

The average length of stay for patients in the partial hospital program is usually about 2 weeks, the investigators note. However, a minority of patients end up in treatment for more than a month and during this prolonged period, some do not seem to improve in their symptoms or functioning despite “intensive psychotherapy and ongoing pharmacotherapy.”

The researchers wanted to understand the reasons for some patients’ lack of progress and examined whether those who did not believe they were worthy of getting better actually took longer to respond to treatment.

In the current research, Zimmerman wanted to focus on these patients and assess whether they did take longer to improve and what diagnoses might be associated with feeling undeserving.

The researchers combined those who were unsure and those who did not believe they deserved to get better and compared them with patients who believed they did deserve to get better.

Participants who did not indicate they deserved to get better were significantly more often diagnosed with several conditions compared with their counterparts who indicated they did deserve to get better:

Zimmerman called these preliminary findings “consistent” with his clinical experience.

He noted he was “surprised” that OCD had the highest odds ratio (OR, 3.5) of being associated with a sense of undeservingness. “But when I thought about it, I realized that it makes sense because people with OCD have insight and are often embarrassed by their symptoms,” he added.

Zimmerman was not surprised that MDD was associated with this sense of undeservingness. A second study currently under review is focusing specifically on MDD.

“One of the things we found, not surprisingly, was that some of the cognitive symptoms of depression, such as guilt and sense of worthlessness, are associated with it,” he said.

The “hypothesized role of shame squares with my experience. And the association with OCD, depression, and trauma are also consistent with what I have seen,” said Duckworth, who is also an assistant clinical professor at Harvard Medical School, Boston, Massachusetts. He was not involved with the current research.

“The role of hopelessness, often seen as a core feature of depression and to some extent OCD and trauma, is an opportunity to see if treatments like cognitive behavioral therapy [CBT] can make a difference. How to engage people in CBT, which works directly at changing one’s automatic negative thoughts, is important,” Duckworth said.

Describing the study as a “snapshot in time,” he noted it would be interesting to follow patients longitudinally.

“I think a whole subset would look back and say, ‘I remember feeling [undeserving] but now that I’ve gotten medication or CBT or therapy, I’m happy I got better,’” said Duckworth.

No source of study funding was listed. Zimmerman, his coauthor, and Duckworth report no relevant financial relationships.

Batya Swift Yasgur MA, LSW, is a freelance writer with a counseling practice in Teaneck, New Jersey. She is a regular contributor to numerous medical publications, including Medscape and WebMD, and is the author of several consumer-oriented health books as well as Behind the Burqa: Our Lives in Afghanistan and How We Escaped to Freedom (the memoir of two brave Afghan sisters who told her their story).

Children at risk of multiple viruses because of lockdown, experts warn
Latest Posts