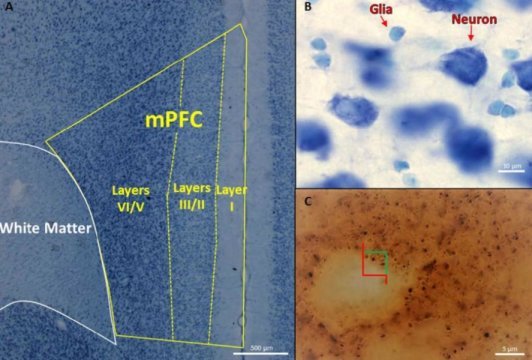 Adult rats that had been exposed before birth and during nursing to a mixture of chemicals found in a wide range of consumer products have a smaller medial prefrontal cortex (mPFC) and perform worse on an attention-switching task than rats not exposed to the chemicals early in life. These findings, published in JNeurosci, demonstrate a long-term influence of endocrine-disrupting compounds on brain development.

Phthalates — chemicals used in plastics belonging to the same class as Bisphenol A (BPA) — can potentially interfere with hormones important for the developing brain.

Although previous studies have identified associations between phthalate exposure and developmental disturbances, little is known about the neurobiology underlying these relationships.

Janice Juraska and colleagues fed pregnant rats a daily cookie laced with human level doses of a chemical mixture based on data obtained from pregnant women. The researchers found both male and female adult offspring of these rats had fewer neurons and synapses in their mPFC and a specific deficit in cognitive flexibility.

As the mPFC is crucial for high level cognitive functions and reduced cognitive flexibility is observed in developmental disorders such as autism, the research shows how early life phthalate exposure can affect the brain and behavior.