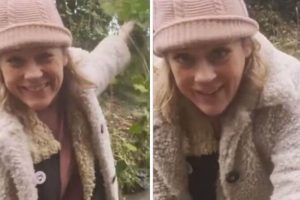 Sarah Beeny discovers a leak in her new house

Talking about why her family decided to make the move to the country in the first place, Beeny, 50, explained that there were multiple factors, but one appeal was the close proximity she would be in with her brother who already lives in Somerset. Another was the benefits that she hoped her four sons would get from the move. Beeny explained: “I’ve got four sons and they are all dyslexic. I mean different levels of dyslexic and they are really musical and artistic. And I worried in London there was the academics and then the arts, there weren’t five fingers in education.” Being born in the countryside, the property developer decided to go back to her roots, and explained that the family’s new life in the country is even serving up improvements for their health.

The Channel 4 star continued to say: “Me and Graham had always talked about this perfect house. I didn’t realise he was so serious, but for years we’d said things about our dream house and then he was like ‘alright let’s build a house’.

“It was a bit of a big move and I guess the thing that I found really was that it was a big plunge because I am the admin for our family. I have got four children, and the admin is ridiculous!”

When asked if she had found any differences between London and Somerset, surprisingly Beeny didn’t hesitate in explaining that noticing more nature has been a pleasant surprise.

“Whereas here I noticed the trees and I noticed the colours. The colour of green in the spring is exquisitely beautiful and then and then you go through the summer. And I really noticed the difference. .

“I didn’t pinch myself to go wow, I’m alive and I’m lucky enough to have eyes. So I can see something so exquisite. I wasn’t in wonderment of nature, in the city. So I think that has acted as a sort of medicine.

“I think I am much happier because of it. Because nature just makes you feel so happy because it’s so amazing.”

Beeny added that there was “no question in [her mind]” that the move has also helped her mental health.

She said that being around nature has “enriched her life,” so much so that she encouraged those who still live in cities, and London especially, to visit their local parks more frequently to reap the mental health benefits she has found.

On the surface, living in more rural areas in comparison to cities may seem to be more beneficial. In fact, according to David Newby, British Heart Foundation professor of cardiology at the University of Edinburgh, when it comes to air pollution, “being in the country is better for you”.

Roy Harrison, professor of environmental health at the University of Birmingham, agreed saying it is “significantly healthier” to live in the countryside. He says research shows that air pollution is responsible for an average loss of life expectancy of six months across the UK and most of that is driven by urban populations.

A 2012 government report by the Department for Environment, Food and Rural Affairs found that health aspects such as life expectancy was higher in the countryside, in addition to a lower infant mortality rate.

The reports also said that the potential years of life lost (PYLL) from life-threatening conditions such as stroke, cancer, and coronary heart disease was lower on all accounts in rural areas in comparison to urban areas in England.

The Mental Health Foundation adds that multiple researchers have found a “fascinating” link between access to green space such as fields, forests, parks and gardens and a reduced risk of mental health problems.

Mind, the UK’s leading mental health charity explains that being outdoors and around animals can have lots of positive effects including:

One individual commented: “I’ve been getting out into nature and walking, either on my own or with dogs, to manage my bipolar disorder for years.

“It helps to keep me calm and physically healthy, and I love taking the time to be mindful of all the beautiful green spaces around me, even when living in a city.”

Ultimately however, the choice between rural and urban living is a personal choice, with benefits for both sides. As Prof Andy Jones, professor of public health at University of East Anglia says, research shows that urban residents for example walk more than rural residents “but these don’t translate to health benefits”.

“If you’re living in a place where you are isolated and don’t have the finances to support yourself, it doesn’t matter where you live. You can be just as isolated in a city centre as in a rural setting.”