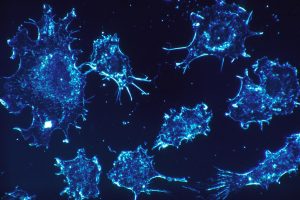 Researchers from Karolinska Institutet and Kancera AB have developed a molecule that makes cancer cells sensitive to radiotherapy. In a study published in Nature Communications, the researchers describe a new way to block cancer cells’ ability to repair their DNA and thus stop the survival of cancer cells.

Radiotherapy is one of the most common cancer treatments. It damages the DNA, causing cancer cells to stop growing and die if the damage is left unrepaired. Unfortunately, some cancers are resistant to radiotherapy and the treatment also damages the DNA in healthy cells, thus limiting the amount of radiation that can be used with respect to normal tissue damage.

The research groups at Kancera AB and Karolinska Institutet have now developed a new drug candidate which blocks the protein and its ability to repair DNA damage. They demonstrated that cancer cells treated with the drug do not survive upon radiotherapy in laboratory experiments.

“It is known that the levels of PFKFB3 is much higher in cancer cells than in healthy cells. However, the discovery that PFKFB3 regulates DNA repair upon radiotherapy is new and very exciting,” says Nina Gustafsson, Assistant Professor and Team Leader in Translational Medicine at the Department of Oncology-Pathology, Karolinska Institutet, who led the study together with Professor Thomas Helleday at the same department.

Foundation for a new cancer treatment

Since normal, healthy cells are not dependent on PFKFB3 for proper DNA repair, the researchers hope that combination therapy with radiation or chemotherapy will be well tolerated. The goal is now to further develop the drug and lay the foundation for a new cancer treatment with less side effects than the treatments currently available.