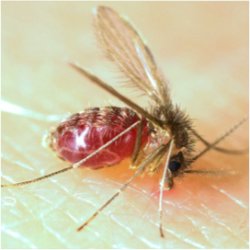 The upgraded Infravec2 online shop is now offering multiple new products for researchers at no cost. These products include additional colonies of mosquitoes, new technologies to study malaria parasites in mosquitoes, new combinations of arbovirus-infected mosquitoes, and new offers for researchers to work in top-level facilities on different disease vectors, including the sandfly (pictured). The updated Infravec2 online shop opens the doors to these rare resources at no cost for researchers worldwide, to aid in control of insect vectors and the diseases they transmit.

One of the newly available mosquito colonies is Anopheles atroparvus, a widespread European species that was the major vector of human malaria until Europe was declared malaria-free in 1975. This mosquito is common in the region from Spain to Scandinavia. This species would be able to transmit malaria again if public health surveillance was relaxed and malaria re-entered Europe. It may also transmit human viruses such as West Nile virus. This Infravec2 colony was initiated from mosquitoes collected in the Ebre River delta of Spain in 2017. The Infravec2 colony replaces a decades-old colony and will allow more accurate research on the risks and control of this mosquito.

Another new offering is a technology to study mosquito transmission of Plasmodium falciparum, the parasite responsible for human malaria, a disease affecting over 200 million people each year. Researchers can test the effect of potential drugs and mosquito control compounds in a special membrane-feeding assay. The tool is commercialised by TropIQ Health Sciences, a partner in Infravec2, and is offered in a small-scale format to test up to 20 compounds, or a large-scale format to test up to 500 chemicals at a time. Access to these new research tools will help researchers more quickly identify useful drugs and insecticides for development.

New arbovirus-infected mosquito combinations are also available in the Infravec2 product catalog. One of these products is the common European backyard nuisance mosquito, Culex pipiens, infected with Usutu virus. Usutu virus was first described in Africa, but since about 2000 it has been increasingly observed in Europe infecting animals and causing mass bird deaths; a 2017 study found an unexpectedly high rate of people with antibodies indicating a past Usutu infection. Usutu virus is being watched closely by vector researchers in Europe, and the availability of this new research product will aid that work.

Finally, the project recently added new facility access options. Researchers can visit rare and unique research facilities to carry out their own experiments on insecticides or vector infection. One new facility option is in the largest facility in the world maintaining living sandfly colonies. This will allow researchers to perform previously impossible experiments on basic sandfly biology and leishmaniasis, a potentially lethal disease affecting more than 10 million people each year. Sandflies also transmit human viruses, in Europe and elsewhere, which can be studied in this Infravec2 facility.

Infravec2 is a European Union funded network supporting research on diseases spread by mosquitoes, other insects and ticks by developing and sharing resources. EU funding allows Infravec2 to provide researchers worldwide with insect vector research products and services at no cost to the recipients. The Infravec2 team recently unveiled its updated online shop and website.