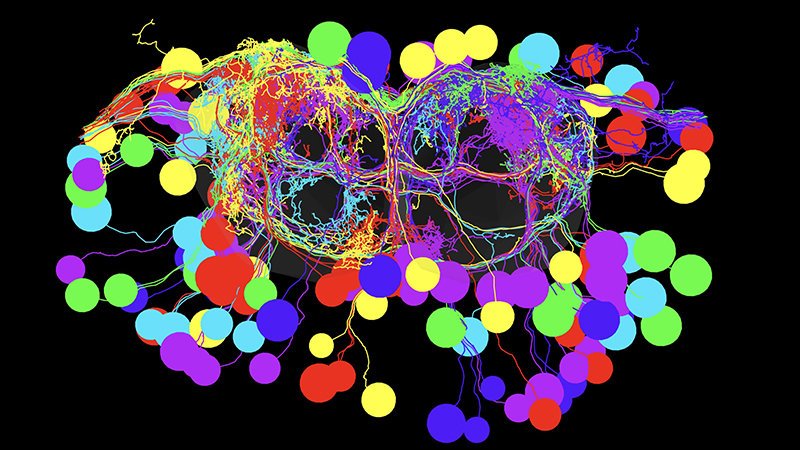 A wasp puts its tongue on a fruit fly larva. Sensing danger, the larva quickly reverses.

That response—to stop the wasp from laying its eggs in the larva—is the work of a single pair of neurons in the larva’s brain, according to new UO-led research. The discovery emerged from basic, early development research in the UO lab of biologist Chris Doe. It appeared Aug. 2 in a paper on brain descending neurons in the journal eLife.

Doe’s seven-member team successfully mapped the circuitry—from the brain downstream to specific motor neurons that control a muscle group—that allows for a smooth and rapid switch in movement. The work, he said, is unprecedented.

“The big step we’ve made is that we have a single neuron that both triggers a new behavior and suppresses an antagonistic behavior,” said Doe, a biology professor and co-director of the University of Oregon’s Institute of Neuroscience.

Doe also is a Howard Hughes Medical Institute investigator and member of the UO’s Institute of Molecular Biology.

“It is even more striking, because these neurons drive the same behavioral switch in larvae and adults, which have completely different motor neurons and modes of locomotion,” he said. “Our finding that the same pair of neurons control crawling of a limbless maggot and walking of an adult fly was quite surprising.”

Changing directions is vital to survival for fruit flies. While larvae contend with wasps, adults are prime dinner choices of spiders, ants and beetles.

Just how neural circuits trigger smooth switching between antagonistic behaviors is a mystery in most animals, Doe said, but it has been seen in nematodes as well.

The methodology used in the study, Doe said, will help other scientists link other direct connections between individual brain and nervous system neurons. Doe’s lab already is looking at neurons tied to navigation behavior in fruit flies.

As the brain circuitry is better understood, Doe said, the payoff potentially could be in more precise human prosthetics or in the robotics of bomb-searching robots or rovers exploring the surfaces on other planets.

The team methodically moved through several steps to identify the backward-inducing brain neurons, starting with more than 300 and winnowing the population until the final two were found.

The biggest surprise, Doe said, was realizing that the same pair of neurons in a larva retracted its connection to the suite of muscles during metamorphosis and then re-engaged with the motor neurons for the six legs that control muscles in the adults. In limbless larvae, crawling is done by peristalsis, or contractions.

“Limbed locomotion involves a pattern of motion, legs, that is completely different,” Doe said. “All the motor neurons are different in the two stages. Those in larvae are lost in metamorphosis. The brain neuron apparently recognizes this in both systems.”

For escape purposes, one behavior must be rapidly inactivated by way of neural communication, he said. Flies and mosquitoes, for instance, can sense a human’s swat and change directions to avoid contact. Larvae can recognize and avoid noxious environments like high salt or bright light using backwards locomotion.

“Until now, no one has shown that there is an upstream neuron that can coordinately suppress some behaviors and induce others,” he said. “Our study gives other researchers a good example of what they may expect to find. A fly has many behaviors. The idea is to map the neurons and circuits controlling all.”

A new map of the brain’s serotonin system
avoid, danger, flies, fruit, How, mystery, of, research, solves, the
Latest Posts