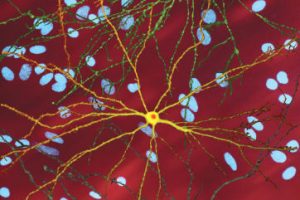 New research gives scientists a clearer picture of what is happening in the brains of people with Huntington’s disease and lays out a potential path for treatment. The study, which appears today in the journal Cell Stem Cell, shows that support cells in the brain are key contributors to the disease.

“Huntington’s is a complex disease that is characterized by the loss of multiple cell populations in the brain,” said neurologist Steve Goldman, M.D., Ph.D., the lead author of the study and the co-director of the Center for Translational Neuromedicine at the University of Rochester Medical Center (URMC). “These new findings help pinpoint how the genetic flaw in Huntington’s gives rise to glial cell dysfunction, which impairs the development and role of these cells, and ultimately the survival of neurons. While it has long been known that neuronal loss is responsible for the progressive behavioral, cognitive, and motor deterioration of the disease, these findings suggest that it’s glial dysfunction which is actually driving much of this process.”

Huntington’s is a hereditary and fatal neurodegenerative disease characterized by the loss of medium spiny neurons, a nerve cell in the brain that plays a critical role in motor control. As the disease progresses over time and more of these cells die, the result is involuntary movements, problems with coordination, and cognitive decline, depression, and often psychosis. There is currently no way to slow or modify the progression of this disease.

While the symptoms of the disease are the result of the loss of motor neurons, the new study adds to mounting evidence that the disease may be triggered by faulty glia, the brain’s primary support cells. These cells include oligodendrocytes—which produce the brain’s supply of myelin, an insulating substance that mediates communication between nerve cells—and astrocytes, which support the function of neurons and maintain the chemical balance necessary for nerve cells to communicate with their neighbors.

Earlier clinical studies have hinted at the role of glial cells in the disease. MRI scans of patients with Huntington’s have shown myelin and white matter loss in the brain long before the symptoms of the disease appear.

The new findings were made possible because of an advance made in Goldman’s lab, which enables researchers to study human glial cells in the brains of animals. Using embryonic stem cells obtained from individuals with the Huntington’s disease mutation, the researcher were able to reprogram these cells to become glial progenitors—the parent cell that gives rise to both astrocytes and oligodendrocytes. When these cells are transplanted into the brains of mice, they out-compete native cells and produce brains with human glia and animal neurons. This model has not only been used to study Huntington’s, but other diseases in which it is believe that glial cells play a role, including frontotemporal dementia and schizophrenia.

In 2016, Goldman’s lab found that when healthy human glial cells were transplanted into mice engineered to express the mutant Huntingtin gene—which typically show signs of Huntington’s disease and die at a young age—the progress of the disease was slowed. That research focused on astrocytes which, among other functions, serve as a buffer for potassium, which regulates the electrical signals that form at synapses, the points of connection between nerve cells. When astrocytes are not doing their job, as is the case in Huntington’s disease, the resulting chemical imbalance causes neurons to become overexcited and ultimately die. In those experiments, the new healthy human astrocytes restored normal neuronal activity and rescued nerve cells that might otherwise have perished.

The new research gives scientists a more precise understanding of how the genetic flaws in people with the disease result in dysfunctional glial cells. Huntington’s is caused by a genetic mutation called a repeat expansion, or a stutter that results in duplicates of a small section of genetic code. The length of this repeat can dictate the age of onset and severity of the disease.

Using cells derived from individuals with the Huntington’s mutation, researchers were able to identify a series of errors that impeded the transcription of genetic information into proteins that tell progenitor cells to become either oligodendrocytes or astrocytes. In Huntington’s disease these transcription errors impaired the creation of oligodendrocytes, and hence resulted in fewer cells able to make myelin, and similarly affected the production of astrocytes, which failed to mature properly and were unable to effectively regulate agents, such as potassium and glutamate, which are necessary for communication between nerve cells.