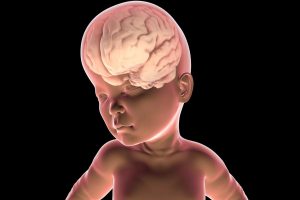 First described in 1971, BRRS has an autosomal dominant pattern of inheritance. The signs and symptoms of Bannayan-Riley-Ruvalcaba syndrome appear at birth or in early childhood. Despite the lack of formal diagnostic criteria, the diagnosis of BRRS is made clinically.

BRRS is a rare pleiotropic genetic condition, with about 60% of all cases resulting from mutations in the PTEN gene. The cause of Bannayan-Riley-Ruvalcaba syndrome is unknown when it is not caused by mutations or deletions of the PTEN gene.

BRRS is characterized by a variety of clinical symptoms that may not always appear in each patient, but rather appear by a wide range of phenotypic attributes. There are patients who have significant symptoms and those who have symptoms that go unreported. At least half of the babies that are affected have macrocephaly, and many of them also have a huge birth weight and body size (macrosomia). Because growth slows during childhood, affected people are of average height and weight. Approximately half of all children with BRRS have intellectual disabilities or delayed development, particularly in speech and motor skills like sitting, crawling, and walking. These delays may improve as the individuals become older.

Additional traits that can be present include neonatal macrosomia (birth weight >97th percentile), accelerated linear growth, dysmorphic features, joint hyperextensibility, scoliosis, and café au lait spots. Epicanthus inversus, frontal bossing, hypertelorism, and a large mouth with relative micrognathia are examples of facial deformities. In addition, neuromuscular problems are common, with myopathy of the proximal muscles (60% of patients) along with varying degrees of delayed neuropsychomotor development (20-50%). Hyperextensibility, scoliosis, and pectus excavatum are some of the skeletal anomalies associated with this disorder.

Hamartomas, also known as hamartomatous polyps, occur in the intestines of almost half of the patients with Bannayan-Riley-Ruvalcaba syndrome. Fatty tumors termed lipomas and angiolipomas that develop beneath the skin are very frequently related to BRRS. Hemangiomas, which are red or purplish growths made up of tangles of aberrant blood vessels, appear in some people who are affected. Although experts are still attempting to understand the cancer risks linked with BRRS, people with the illness may have an elevated chance of acquiring certain cancers.

PTEN is a tumor suppressor gene that maps to chromosome 10q23.3 and has a role in the cellular proliferation, migration, and apoptosis pathways. The PTEN gene produces a tumor suppressor protein, which means it generally prevents cells from proliferating too quickly or uncontrollably. Cell growth is not efficiently regulated if this protein is absent or faulty. Hamartomas and other malignant and noncancerous tumors can result from uncontrolled cell division. Although the protein generated by the PTEN gene is believed to have other vital functions within cells, it is unclear how mutations in this gene can cause other BRRS symptoms such as macrocephaly, developmental delay, and muscle and skeletal abnormalities.

Although it appears to be rare, the incidence of Bannayan-Riley-Ruvalcaba syndrome is unknown. Several hundred incidents have been documented in medical journals. Male dominance has been documented, however, females can also be affected, although in a weaker form. Because the disorder's signs and symptoms vary, and some of them are minor, researchers believe it is underdiagnosed.

Several groups of scientists have developed criteria to aid clinical diagnosis, although there are no international consensus criteria for diagnosing BRRS. A clinical diagnosis of BRRS is described as having three out of four features: macrocephaly, lipomatosis, hemangiomas, and speckled pigmented maculae on the penis, according to one study. If the disease-causing mutation is detected in an affected family member, antenatal diagnosis is achievable for at-risk pregnancies.

Bannayan-Riley-Ruvalcaba syndrome has no specific treatment. The management of specific signs and symptoms is the basis of treatment. Increased surveillance of cancers affecting the breast, thyroid, uterus, and kidney is recommended for persons with BRRS.

To summarize, the cases documented in the literature show a wide and diverse phenotypic range in the presentation of BRRS. It's crucial to remember that BRRS can manifest in a variety of ways, including complete and severe cases. Clinicians, particularly pediatric endocrinologists, are encouraged to have a high diagnostic suspicion for this syndrome to detect thyroidal nodules and intestinal polyps, which are two of the most common symptoms. Patients with germline PTEN mutations can get genetic counseling, and asymptomatic family members should also be screened for the mutation to identify individuals who should be monitored before symptoms appear.

Aimee graduated from Oxford University with an undergraduate degree in Japanese and Korean Studies, with an exchange year at Kobe University in Hyogo, Japan. Throughout her studies, Aimee took part in various internships, gaining an interest in marketing and editorial work along the way.In her personal time, Aimee can be found either attempting to cook, learning how to code, doing pilates, as well as regularly updating her pet hamster’s Instagram account.

Breastfeeding isn’t just about the baby – women’s bodies matter, too