Bekah Martinez Breastfeeds Her Daughter and Newborn Son Together 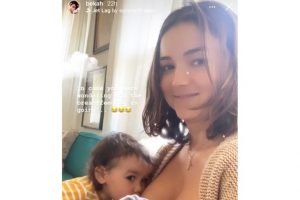 Bachelor alum Bekah Martinez proved she’s a multitasking mama as she breastfed her toddler daughter and 1-day-old son together on Saturday, June 20.

The former reality TV star, 25, shared a video on her Instagram Stories that showed her nursing her baby boy, who was born on Friday, June 19.

“In case you were wondering how the breastfeeding is going …” she wrote on the video along with three laughing-crying emojis as her daughter Ruth, 16 months, looked into the camera and said “Dada” as Martinez told her, “Dada’s at work.” Ruth then made a beeline for her mom’s boob and began suckling.

Martinez, who appeared on Arie Luyendyk Jr.‘s season of The Bachelor in 2018, announced the arrival of her second child with boyfriend Grayston Leonard on Saturday.

The California native also shared photos from the birth, showing herself in labor in an inflatable kiddie pool in her living room and then the emotional moment when she held her baby for the first time.

On Saturday, she posted videos that showed her family visiting the new arrival. As her mom cradled her new grandson, another visitor suggested a name for the baby: “Edward James. Doesn’t that sound cute?”

“No,” Martinez replied as her boyfriend said, “It sounds like somebody that goes to private school.”

The “Chatty Broads” podcast and the rock-climbing gym owner, 31, announced they were expecting baby no. 2 in November 2019, nine months after they welcomed Ruth.

She admitted at the time that she was “shocked” when she found out she was pregnant. “My body was almost convulsing,” she said of seeing the positive pregnancy test. “I was shaking so hard. I was in utter shock and disbelief.”

But the University of California Irvine student said she was excited about having her babies so close together in age.

“My sister and I are only two years apart [and] it’s a blast,” she said on her podcast. “And if it’s a little boy, how fun because we haven’t had a little boy yet.”

The following month she wrote about on Instagram about giving herself “permission to be joyful” about her second pregnancy so soon after having Ruth.

“We’re not fearful. We’re delighted,” she wrote. “I can see it on Gray’s face when he touches my belly and tell the baby he loves it. Maybe that’s why this pregnancy is already zooming by— time really does fly when you’re having fun.”

Scroll down to see pics of Martinez’s first days with her baby boy.

In order to view the gallery, please allow Manage Cookies