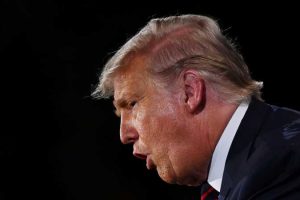 Whew, that first presidential debate of the 2020 campaign season is finally over…and, frankly, many of us aren’t sure we’re going to survive a second round. While we know what their words were telling us (well, sort of, as the constant interruptions on both sides made it a bit hard to follow at times), how could we possibly tell what the candidates were really thinking and feeling while they engaged in their dueling monologues?

Luckily, we have a body language expert to help us make sense of it all. Psychologist and political advisor Dr. Reneé Carr applied her expertise to deduce just what was going through the not-so-transparent mind of Donald J. Trump.

The tale told by Trump's tie

Carr shared an analysis of what Trump’s fashion choices indicated about his mindset going into the debate — specifically, his decision to wear a blue necktie adorned with thick blue stripes and thinner, but brighter, red ones. We’re assuming this tie was not a reference to the dominance of blue states over red ones, since that’s a thought that Trump would not be happy with.

Instead, Carr sees the red stripes as “a subconscious reflection of his fiery mentality and readiness to fire darts without holding back.” She also interprets the red — a power color — as a reflection of the POTUS’ “belief that he must fight for and defend himself.” As she remarked, it was obvious that Trump didn’t believe he’d get fair treatment from Chris Wallace, something that became clear at a later point in the debate when he told the moderator “I guess I’m debating you instead… I’m not surprised.”

During the second session of the debate where Trump and Biden discussed (if one could call it that) COVID-19, Carr notes how Trump looked down and away when Biden accused him of not addressing the pandemic threat. She explains that averting his glance in this way “reveal[s] he did not agree with Biden’s statements,” as confirmed by the fact that he “even gave a verbal ‘boo’ to display his disapproval.” Carr explains that “the act of ‘booing’ is a behavioral display of not only wanting Biden to know of his disapproval, but Trump also wanting the audience to know of his blatant rejection of Biden’s statements.” Carr also points out a certain dismissive hand gesture Trump used. While Biden was speaking, he flapped his hands “as if he were shooing a fly,” something that “further display[s] his dismissal of Biden’s statements.”

There was one point, however, where Trump appeared to back down when Biden called him out in a misrepresentation. When he tried to compare how he dealt with the COVID crisis to Biden’s handling (or mishandling) of H1N1, Biden pointed out that H1N1 had a far lower fatality rate. Trump quietly conceded the point, saying it was a much less deadly disease, an act, Carr says, that “reveals that Trump may exhibit alpha male characteristics when he believes his opponent is weaker than he. Yet, when an opponent exhibits unexpected strength, Trump is likely to back down or dismiss the event, or person, altogether.”

Trump's sticking to his story

Many people believe that throughout his many years in the spotlight, Donald Trump is pretty set in his thinking and is usually 100 percent convinced that his way is the right, indeed, the only way. Carr singled out several gestures of his that confirm this character analysis. The fact that he uses his hands to make a box shape, she sees as being “symbolic of Trump sticking to his thoughts and a subconscious display that he is not going to go outside of this figurative box nor waver from his original opinion.” She also notes how he “uses his hands to draw a symbolic straight line reflecting his very linear thoughts when speaking.”

When speaking of climate change, Trump was seen repeatedly nodding his head “yes”, an “act of firm affirmation” that “reveals Trump’s full confidence in his actions toward climate change and that he firmly believes his actions were justified.” Throughout the debate, Trump “often…jut[ted] his chin out showing that he is not afraid of taking a punch.” This could be seen as yet one more act of affirmation showing how he’s willing to stand up for what he believes in.

At the beginning of the debate, Trump avoided answering a question about his Supreme Court justice pick by quoting Ruth Bader Ginsburg and then calling Biden a socialist instead of addressing the point. Carr says “This technique of deflection is an act of passive-aggressiveness in that Trump was able to avoid the psychological discomfort of answering the question by relying upon the respected opinions and words of others to justify his own actions.” She goes on to say that “the use of an unfriendly term (socialist) is an opposition tactic to disarm an opponent and cause distraction; thereby, allowing Trump to avoid directly answering the question.”

Later on, when the question of Trump’s taxes came up, he “exhibit[ed] a primal display of showing his teeth as a non-verbal and subconscious act of aggression and self-protection.” He also displayed verbal aggression throughout the debate, something Carr says was ” evidenced by interrupting both the moderator and Biden [thus] allow[ing] Trump to repeatedly take center stage.” She explains that his “aggression without remorse” is something that his supporters probably see as “a sign of strength,” but not everyone will see it that way.

Here’s what it’s really like to work at Publix

Your Teens Are at All-Time High Risk for Mental Health Issues at College: What Can You Do?

This is What the Tooth Fairy Pays in Your State