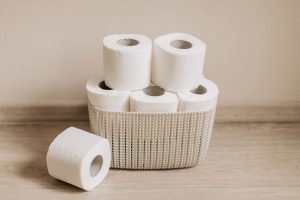 Ah, the joys of potty training. Although it only lasts a season (so we’ve heard), it can feel never-ending. Moving from diapers to underwear, getting up in the middle of the night instead of wetting the bed, avoiding accidents, wiping correctly — it’s exhausting, and OK, a little gross, too. If you are in the trenches, one parent on Reddit shared a genius hack to help with that last part, and you can try it today!

In the parenting subreddit, a woman asked for help on how to get her 9-year-old son to wipe properly. User @Ive-readit commented with one tip they use for their 4 and 6 year olds.

“I just had my 4 yo and 6 yo wipe peanut butter off a plate with some dry toilet paper,” this parent wrote. “To show them how hard they have to wipe. It’s helped a lot.”

One person commented, “That sounds creative and intuitive! Good on you!” Another said, “I laughed, but it is the best idea.”

This parent offered advice in response to the original poster, who said her 9-year-old stepson “really just does not care about his hygiene.” In order to spend more time playing video games, this boy takes “less than five minute” showers, pees all over the toilet, and doesn’t wipe well after a bowel movement in order to not “waste any time away from his videos/games.”

She noticed that he wasn’t wiping well after doing his laundry. “My husband and I have both been noticing stains in his underwear when we are doing the laundry. It’s been going on for months maybe even a year now.” She later added, “Just this evening, I swore I smelled poo in our living room and I was convinced the new puppy has just gone somewhere. Until it occurred to me that the smell was following our son around. I asked him to take his nightly shower, grabbed his underwear out of the hamper after he got in, and as I suspected, there’s a giant stain.”

Other parents offered advice on fixing this problem, ranging from installing a bidet in the bathroom to making the son clean up his messes (and do his laundry!), and setting limits on the video games.

The original poster edited to add she will be trying several of these suggestions. “Thank you again to everyone who offered their support and suggestions. I’m really glad I thought of coming here for help. You did not disappoint!”

And if you want to teach your kids to wipe, or remind them of how much toilet paper it takes to get the job done, then you should definitely try out the peanut butter on a plate trick!

Celebrities — they’re just like us! Especially when it comes to embarrassing their kids.

How to pick the right baby shampoo for curly hair