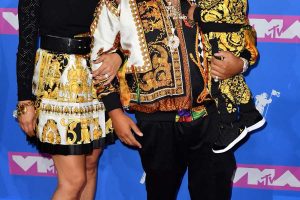 On Thursday, DJ Khaled announced he and fianceé Nicole Tuck are expecting their second child, along with a video from a recent sonogram appointment with their son Asahd, who turns 3 on Oct. 23.

“Daddy, another one,” Asahd also says in the video, referencing his father’s famous tagline.

Along with the video announcement, DJ Khaled also wrote a heartwarming caption to express his excitement.

“God is the greatest. All I ever wanted to do was inspire the world to be great and to leave a legacy. Almost 3 years ago when I found out my queen was expecting our son Asahd I knew my life would change forever and that OUR legacy would soon be on the way,” he began.

“After that blessing I released some of my biggest albums to date (Grateful and Father Of Asahd) inspired by his greatness. Just when I thought life couldn’t get any better, I received another blessing that my queen is expecting an addition to our legacy,” he said.

The parents-to-be welcomed their firstborn in 2016 and the deejay has since dedicated his music to his son, even giving Asahd an executive producer credit on all of his albums.

DJ Khaled recently raved about his family, telling PEOPLE in May: “[I’m focused on] being the most amazing father and the most amazing king to my queen. She’s so beautiful! She’s the most beautiful woman I’ve ever seen in my life. And my son is everything.”