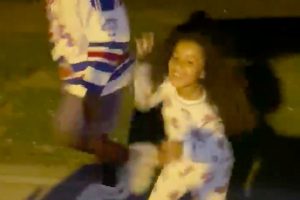 Last week, they reunited in person for the first time in weeks after the reality star flew to Cody, Wyoming, where her husband had been staying. In photos, she was seen crying in the car with West, and a source told PEOPLE that during the trip, she urged him not to move forward with the campaign and "focus on his mental health instead."

West went on to issue a public apology to his wife on Twitter, writing: "I would like to apologize to my wife Kim for going public with something that was a private matter. I did not cover her like she has covered me. To Kim I want to say I know I hurt you. Please forgive me. Thank you for always being there for me."

Although a source previously told PEOPLE that Kardashian West "was ready to end her marriage" before the trip to Wyoming, she “still sees divorce as a last resort.”

"Kanye suggested that they take a family trip together and Kim agreed. She wants to do everything she can to save her marriage," the source said. "It's all very complicated though. Kim wants him to get proper help, and Kanye still doesn't want to. Kim is just taking things day by day right now."

If you or someone you know need mental health help, text "STRENGTH" to the Crisis Text Line at 741-741 to be connected to a certified crisis counselor.