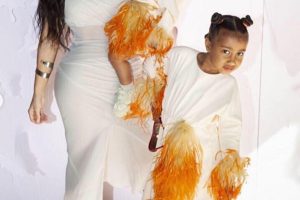 Kim Kardashian West couldn’t have been happier to celebrate her first Mother’s Day as a mom of four.

A source tells PEOPLE that the reality star, 38, “had a beautiful Mother’s Day weekend with her newborn and older kids” after announcing the birth of her new son with husband Kanye West on Friday.

“She didn’t seem stressed out at all,” the insider reveals. “Before the baby was born, she was freaking out for weeks because she felt they weren’t ready for him. But the second he was born, Kim was just focused on how happy she is that her baby boy is here.”

As someone who undoubtedly has a usually hectic schedule between being a mom, starring on Keeping Up with the Kardashians, promoting her KKW Beauty line and more, Kardashian West is taking some downtime at the moment to get acquainted with her new addition.

“She has a bit of a lighter schedule right now so she can bond with her baby,” the source tells PEOPLE. “She seems very happy. And Kanye loves the energy of having a newborn. A new baby to love and get to know is so special for the whole family.”

Kim Kardashian and Kanye West “Have a Name in Mind” as Newborn Son Meets Siblings: North Is the “Most Excited,” Says Source

Kardashian West announced the arrival of her fourth child on Twitter Friday, writing, “He’s here and he’s perfect!” She and her husband also share daughters Chicago, 15 months, and North, 5½, plus son Saint, 3.

She followed up with a second tweet that read, “He’s also Chicago’s twin lol I’m sure he will change a lot but now he looks just like her ✨”

On Saturday, Kardashian West reflected on her CBD- and meditation-themed baby shower and shared new photos from the festivities on April 27.

“We celebrated our baby boy about a week ago and now he’s here! He’s so perfect!” she wrote on Twitter. “I was freaking out for nothing because he is the most calm and chill of all of my babies so far and everyone loves him so much.”

The reality star and rapper West, 41, have yet to share their son’s name. But considering the teddy-bear emoji tacked on to the end of Kardashian West’s Saturday photo tweet (as well as a follow-up tweet with more baby-shower photos), fans think they may have figured it out.

In addition, one of Kardashian West’s friends —  former E! star Nicole Williams, who attended her shower in April — used the same teddy-bear emoji in the comments section.

So could the new baby be named Teddy or Bear or even Cub? Some fans connected the dots by referencing West’s hometown of Chicago and the city’s MLB and NFL teams: the Chicago Cubs and Bears, respectively.

That theory wouldn’t be a completely far-fetched guess, as their second-youngest child is named Chicago — a moniker her uncle Rob Kardashian could’ve hinted at following her birth, tweeting two bear emojis.