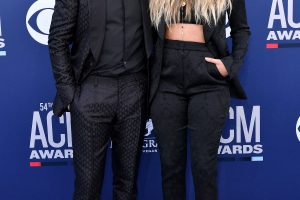 “During the middle of a shot, they just ran out there — and we just kept the shot,” country singer Thomas Rhett told PEOPLE Sunday in Las Vegas

Thomas Rhett‘s daughters made an unplanned cameo in his new music video!

The country star dropped the meaningful visuals for his latest single "Look What God Gave Her" on Saturday, and the clip features his inspiration: his wife Lauren, plus their daughters Ada James, 19 months, and Willa Gray, 3.

“It’s really a family-affair kind of thing,” Thomas Rhett, 29, told PEOPLE on Sunday during the red carpet pre-show ahead of the 2019 ACMs in Las Vegas.

However, his daughters weren’t initially going to appear in the clip.

“They weren’t supposed to be in the video,” Thomas Rhett said. “They were just kind of standing back there, had their little ballerina skirts on and during the middle of a shot, they just ran out there — and we just kept the shot.”

” ‘Cause any time they’re there, it just makes it sweeter,” added the proud papa.

Be sure to check out PEOPLE’s full ACM Awards coverage to get the latest news on music’s biggest night.

The new track — which will appear on Thomas Rhett’s new album Center Point Road, due out in May — reads like a love letter to Lauren.

“The song really is just a thanks to the good Lord for all the amazing talents He blessed my wife with, inside and out,” he told PEOPLE on Sunday. “And the song really just represents her in an amazing way.”