Home » Family Health » Khloé Kardashian Shares Sweet Photo of Her and True in Matching Outfits: 'A Leopard and Her Cub'

Khloé Kardashian Shares Sweet Photo of Her and True in Matching Outfits: 'A Leopard and Her Cub' 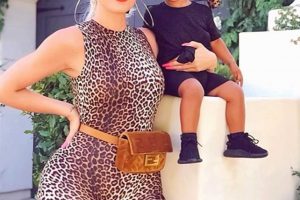 Khloé Kardashian and her little girl True are wildly adorable!

The mother-daughter duo appeared on Instagram on Tuesday, where they were featured in several photos together wearing matching animal-print outfits as they posed outside.

True, meanwhile, matched her mother in a leopard-print headscarf and wore a black ensemble with black sneakers. The 16-month-old also had her signature smile on full display as she beamed for the camera alongside Kardashian.

“A leopard and her cub 🐆,” the Good American designer captioned the stylish shot.

Throughout the summer, Kardashian hasn’t held back from sharing adorable photos of — and with — her baby girl.

Last Tuesday, the mom of one posted two sweet snaps of True — one of her smiling for the camera, while the other featured the baby giving her best pout — as she cozied up into an armchair.

Like Kardashian’s most recent shot, True showed off her impressive style by wearing a black off-the-shoulder top and a matching headband. She also wore several bracelets and diamond stud earrings in the photo.

“✨You are my sun, my moon and all of my stars ✨,” Kardashian wrote beneath the snapshots of her daughter.

Fashion isn’t the only thing that Kardashian and True enjoy — the duo also have fun doing morning “workouts” together!

In videos shared to her Instagram Stories last Thursday, Kardashian and True lounged around in her bed and the reality star sweetly bounced her daughter up and down on her legs, which prompted a lot of precious smiles from the 16-month-old.

Little True wore a pink frilly top as her mom lifted her up and down in the air with her legs. Kardashian, meanwhile, sported some white and gray striped pajamas.

“My workout this morning,” Kardashian wrote along with the video.

Besides spending time with her mom recently, True has also been hanging out with her father, Tristan Thompson.

Last month, the 28-year-old NBA star shared a sweet photo on Instagram of True sitting in between his legs as they played together.

“Twins 🙏🏾😍🙌🏾,” Thompson captioned the shot, pointing out their striking resemblance.

Around that time, a fan also noted how similar the father-daughter pair look. “I know Khloé [Kardashian] hates Tristan, but Baby True [is] starting to look just like him,” the fan wrote alongside a side-by-side photo.

Kardashian later went on to defend Thompson by saying she doesn’t hold any grudges and could never “hate anyone who helped create such an angel.”

“People make mistakes, but I won’t hurt my own healing by holding on to hate,” she wrote, as captured by Comments by Celebs.

“I’m too busy raising my beautiful baby and securing that [money] to hate any individual. Sweet True has always looked like her daddy. She’s beautiful!!” she wrote.