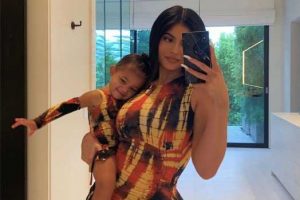 Kylie Jenner’s daughter Stormi has already shown that she’s following in her mother’s footsteps when it comes to fashion, but this weekend, the Keeping Up with the Kardashians star and her 16-month-old baby girl took things to the next level.

On Saturday, the Kylie Cosmetics mogul, 21, shared several adorable photos of the pair posing together while wearing matching tie-dye dresses.

Both mother and daughter wore the same tank top dress, which had matching detachable sleeves, although Jenner chose to pair her look with a pair of black heels, while Stormi rocked some white sneakers.

Alongside a smiling photo of the reality star holding her daughter close, Jenner praised Stormi, calling her “my real life bestie.”

Recognizing that the similarity between the pair extends to far more than just their outfits, Jenner called Stormi her “mini me” in another set of pictures, which included a selfie of the proud mama leaning in to give her daughter a kiss.

The Kylie Cosmetics mogul went on to admit that she has some mixed feelings regarding how much her baby girl has grown over the past year.

“My girl is getting so big,” she wrote alongside a solo shot of Stormi outside, adding both an emotional-faced emoji as well as a heart-eyed one.

In the comments section, Jenner’s sister, Khloé Kardashian, who has a young daughter of her own, shared that she couldn’t believe how quickly their babies were growing up either.

“It’s so so scary how fast they grow up,” wrote the mother of True Thompson.

Days earlier, Stormi and her 14-month-old cousin True took a trip to the farm together, where they got to enjoy each other’s company while also spending time with some adorable animals.

Stormi was dressed casually in a blue T-shirt with a cloud print that read “Wish You Were Here” on the back, a nod to her father Travis Scott, as well as black leggings and sneakers. True also wore a laid back look, sporting a plaid dress with a matching blush cardigan and sparkly jelly sandals.

At one point, the two toddlers shared a heartwarming bonding moment, with Stormi reaching over to give her younger cousin a hug.

“My heart,” Jenner wrote over the top of the adorably affectionate clip.

In keeping with the spirit of Kardashian family closeness, Stormi and True spend a lot of time with each other, as well as their 17-month-old cousin Chicago, who is the youngest daughter of Kim Kardashian West and husband Kanye West.

Earlier this month, Jenner shared an adorable slideshow of the little girls who were all born within a three-month span last year. In the images, the toddlers could be seen pulling completely straight faces while holding baby sharks.