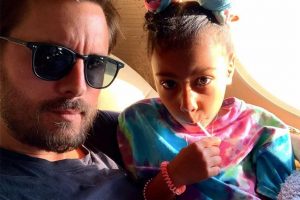 Scott Disick and North West are one dynamic duo.

The Keeping Up with the Kardashians star, 36, and his 6-year-old niece snapped a sassy picture together recently, with the two posing for the selfie aboard what appears to be a private plane.

North — who’s sucking on a lollipop in the photo — is rocking a tie-dye ensemble as she and Disick share a blanket, her hair tied up into two buns on the top of her head. Disick, meanwhile, looks comfortably casual in a simple pair of black sunglasses and a navy-blue T-shirt.

“We fly,” he captioned his Monday Instagram post — a possible double entendre, given the pair’s presumed airborne nature in the snapshot.

Although Disick and former girlfriend Kourtney Kardashian ended their on-again, off-again relationship four years ago, he still makes time for her sisters and their families.

And Disick’s maturation has not gone unnoticed by the mother of his own three children: Reign Aston, 4½, and Mason Dash, 9½, plus daughter Penelope Scotland, 7 next month.

“It’s really nice to see how much Scott has grown and how much he’s invested in really being a great dad to the kids,” Kardashian said of her ex’s personal growth in an April episode of KUWTK.

“I feel like the biggest thing that you and I have always talked about — that you wanted from me, if there was anything — was just to see me consistent with you and my family,” Disick acknowledged. “It’s been over a year of consistency and I feel like we’re good. Our parenting’s been better, the kids are better.”

“We’ve always said that we were going to try to be family,” he added. “Obviously it didn’t work out perfect, but this is as close as we can get.”

As Disick and Kardashian continue to co-parent their three kids, not everyone is excited at a hypothetical prospect of the two of them getting back together. In fact, Kris Jenner expressed concern over the idea during an episode of KUWTK earlier this month. (Disick has been dating Sofia Richie since 2017.)

Meanwhile, North recently celebrated her birthday on June 15, while Disick and Kardashian’s daughter Penelope was the co-guest of honor at the girls’ joint Candy Land-themed birthday bash that same day.