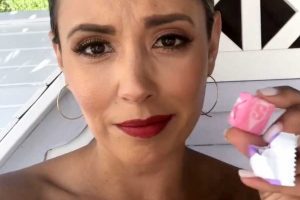 A Los Angeles news anchor is spreading the word about the dangers of leaving your children unsupervised while they eat Easter candy after she experienced a terrifying scare with her daughter.

Today in LA‘s Daniella Guzman revealed in a video shared to her social media accounts on Sunday that her 3-year-old daughter Olivia nearly died after choking on a pink Starburst from her Easter candy.

Guzman said the incident happened while she was in the kitchen heating up Olivia’s lunch, but luckily, her husband Hector was nearby and performed the Heimlich maneuver on their toddler until she spit out the chewy candy and was able to breathe.

Although Olivia was okay, Guzman explained that she was speaking out in an effort to prevent something like this from happening again.

“Hey guys, I just wanted to warn you really quick because I had one of the scariest moments of my life just right now,” Guzman began the video, posted to her Facebook and Instagram.

RELATED: Toddler Permanently Paralyzed After Choking on Apple Given to Him at Daycare

“My 3-year-old daughter started opening up her Easter eggs while I was warming up food for lunch and she opened one and she opened one of these little Starbursts and she started choking on them,” the news anchor continued, as she held up the pink-wrapped Starburst.

From there, Guzman said she began to “panic” as Olivia temporarily stopped breathing — but then her husband stepped in.

“She could not breathe. I started screaming; I panicked honestly,” she recalled. “I am so thankful that my husband was here to help me and he started like, pumping her stomach and she spit it out but I was so scared.”

“I know a lot of kids out there are opening their candy from their Easter eggs but please be very careful, especially these little ones right here,” she finished, holding up the pink candy again.

Guzman also captioned the Instagram post with, “Please be CAREFUL!!! I had the scariest moment of my life!!”

Shortly after the ordeal, Guzman shared another update about Olivia on Instagram and confirmed that her youngest daughter was doing well.

Alongside a photo of the 3-year-old smiling and giving a thumbs up, Guzman wrote, “Thank God! She’s okay!”

The journalist and mom of two also added a pair of praying hand emojis to the caption.

Besides Sofia, Guzman and her husband also share an 8-year-old daughter Sofia.

According to BabyCenter, parents are encouraged to avoid giving their children hard candies, such as jelly beans, butterscotch drops, or peppermints until they are 4 years old.

Adults who suspect a child may be choking should look for the signs, which include coughing, gagging, high-pitched, noisy breathing, holding their neck, or turning blue, Children’s Hospital of Los Angeles reports.

In the event that a child is choking, adults should call 911 and start giving them the Heimlich maneuver — and if necessary, CPR — until the child moves or help arrives.