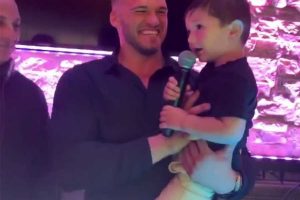 Greyson Valor is bonding with his mom’s main squeeze!

Jenni “JWoww” Farley‘s 3-year-old son looked like a microphone natural in a video the Jersey Shore: Family Vacation star, 34, posted to her Instagram Story on Sunday —  as Greyson was held by Farley’s boyfriend, Zack Clayton Carpinello.

The professional wrestler, 24, is all smiles with the 3-year-old in his arms — at one point leaning in to whisper something in the little boy’s ear as he continues to steal the show.

Jenni “JWoww” Farley Says Son, 3, Has Made “Leaps and Bounds” in Progress After Autism Diagnosis

Carpinello recently celebrated alongside the reality star and her ex, Roger Mathews, at a birthday party for the former couple’s daughter, Meilani Alexandra, who turned 5 on July 13.

In a video Farley shared to Instagram, Mathews, 44, sat at a table with Greyson snoozing on his lap and Meilani in another chair.

Shortly after Farley emerged from the house carrying a mermaid-themed cake and began the gathering’s rendition of “Happy Birthday,” Carpinello exited behind her and approached the table. He then handed his girlfriend a stick lighter to light the cake’s number “5” candle so Meilani could make a wish and blow it out.

“Meilani’s 5th, wonderful day @jwoww ❤️,” Carpinello captioned a photo gallery of the birthday girl that day, which showed her in a Belle dress and playing with various Disney Princess dolls in the pool, as well as a close-up of her colorful mermaid-themed cake.

Farley and Carpinello have been dating since at least April, but he has been a friend of the family since prior to sparking a relationship with the Jersey Shore star. In fact, Greyson already had a hilarious nickname for the wrestler as of late May: “Baby.”

“He’s always like, ‘Hi, Baby!’ ” Farley told Entertainment Tonight, adding that Meilani has “always known him as [my friend] Erica’s brother, so that’s how I wanted to keep it with the kids, so it’s not an awkward transition. So they’ve just always known him as one of our really close friends.”

“I’ve spent a lot of time with the kids,” said Carpinello. “I’ve known Meilani for a few years. She’s known me for a couple years, she is great with me. I love the kids. They’re great.”

“[Meilani] honestly probably likes him more than me at this point, because he’s cooler and will do a lot more,” Farley joked to ET. “And I’m like, the mom yelling in the background. But it’s fine. I’ll let him have his moments.”