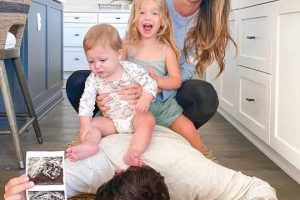 The girls are outnumbered in the Tolbert household!

Tanner and Jade Roper Tolbert revealed on Tuesday that their third child on the way will be a boy, using a powder cannon of color to unveil the sex.

"We are SO excited and thankful to be welcoming a healthy baby boy into our family!" Jade told E! News, who first shared the announcement.

"Emmy, Tanner and I all were all putting our bets on a girl, but this is truly such a fun and happy surprise! It may take a while for Emmy to call the baby brother though. She is still referring to him as sister."

She continued, "I'm so grateful, and I'm so happy we decided to find out before the baby is born. It gives me something to look forward to and I feel even more bonded to him now."

Jade joked that the "reveal for the sex of the baby was a total Pinterest fail," as their initial volcano eruption reveal did not work as expected.

"We were hoping for a volcano eruption of color, and it came out like a flat blue pancake!" she laughed, as seen in exclusive photos obtained by E! News. "It wasn't perfect, but we laughed and the photos came out so beautiful regardless," Jade added. "Definitely memories we will have forever."

The family ended up using a powder cannon from their photographer to later snap pictures with the cloud of blue powder in the air.

"It's pretty awesome we are having two boys so close in age. I'm excited to see them grow up and be so close and hopefully be a little competitive with each other," Tanner added. "It'll be fun to see the differences in personalities. Plus, this way Emmy is still our only girl and that feels special to us."

The Bachelor in Paradise couple previously teased the reveal on Jade's July 9 Instagram Story, telling the camera that they were on their way to her 20-week ultrasound, where they hoped to be get an envelope with the sex inside.

The baby boy will join Jade and Tanner's son Brooks Easton, who turns 1 on July 29, and daughter Emerson "Emmy" Avery, 3 next month.

Jade, 33, and Tanner announced they were expecting their third child on May 18, sharing a hilarious photo of the third-time mom-to-be and her kids sitting on top of a facedown Tanner — who seemed a little overwhelmed as he held up a strip of ultrasound photos and a positive pregnancy test.

That same day, the couple revealed in a Q&A on Jade's Instagram Story that she was 13 weeks along and due to give birth around Thanksgiving.

"Oops I did it again … no, this one was not planned," Tanner, 33, said in response to one fan who asked if the pregnancy had been in the works, singing the first bit in the style of Britney Spears. "Very much an accident, and very much a surprise when Jade told me."

"Yes, this was a big surprise," added the third-time mother-to-be.

In an interview with Entertainment Tonight later in May, the couple shared that Jade's initial response after finding out she was pregnant for the third time was to blame her husband.

"Jade just came down one night … and she just throws the test down on the table and goes, 'Tanner,' " he recalled to ET.

"I just slapped it on the table," added Jade. "I saw [the positive test] and I was like, 'You mother effer.' I slapped it down on the table and he was just so shocked."

Regardless, Jade said she's viewing her surprise third pregnancy as a blessing: "Sometimes things come in waves that you don't plan, but those are the best surprises."

Pregnant Malika Haqq Reveals the Sex of Her Baby on the Way: 'I'm Thankful'