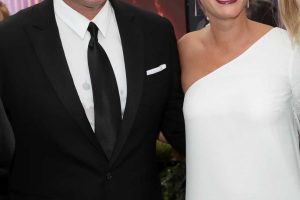 The food blogger and soon-to-be mother of four, 38, walked the purple carpet at the 2019 Emmy Awards on Sunday afternoon alongside husband Carson Daly, showing her support — and her baby bump! — in a pearly white one-shoulder gown. Meanwhile, The Voice host, 46, rocked a classic black tuxedo.

“It’s crazy, oh my gosh. We love our kids!” Daly said in a PeopleTV interview alongside his wife, joking, “I remember my dad who had, like, 10 kids. At his 75th birthday, we were all around my father — of course, we worship him. I thought, ‘You know what? I’m going to have a lot of kids.’ ‘Cause it’s an insurance policy. They will take care of you.”

“So when we’re old, they will take care of us,” he added, quipping that “You need to be careful when you walk in” at his Today show gig, because there is “very fertile water” going around. (Dylan Dreyer is pregnant with baby No. 2, while Jenna Bush Hager gave birth to her son last month and Hoda Kotb welcomed her second daughter in April.)

Ahead of the show, Daly shared a side-by-side snapshot that showed his wife getting her makeup done and himself sitting on the floor with a tablet, dressed in shorts and a T-shirt. He captioned it, “One of us is getting beautiful for the #Emmys & the other is near an outlet playing #fortnite. Go @nbcthevoice!”

The Voice is nominated for outstanding reality competition for the eighth year in a row. The series took home the Emmy in 2013, as well as in 2015 through 2017.

Daly announced the exciting news that the couple are 12 weeks along in expecting their fourth baby on Friday’s episode of the Today show, joking to his excited co-hosts after they showered the dad-to-be with hugs, “You should hug Siri, not me — I’ve done very little in this situation.”

They both announced the news on Instagram afterward, sharing a snapshot of her baby bump with all three of their kids’ hands sweetly touching her stomach.

“Thrilled our family is growing. God’s blessings in our lives truly amazes us. Thank you for the kind thoughts & well wishes,” the former Total Request Live host captioned his post.

The Dalys are already parents to daughters London Rose, 5, and Etta Jones, 7, plus son Jackson James, 10.

“As a fan of even numbers, I’m thrilled to share with you that @carsondaly and I are expecting Baby #4!” Siri captioned her reveal. “I’ve always dreamed of a big family and feel beyond thankful for this miraculous blessing.”

“And a huge congrats to my 10 year-old son, who is totally going to raise this kid for me. Right? 😉,” the cookbook author and PEOPLE blogger joked of their oldest child. “Now if you’ll excuse me, my daily bagel is waiting for me … 🤰🏼 #bagelbelly.”

The couple wed in a private ceremony in December 2015 after 10 years together, Daly’s rep confirmed exclusively to PEOPLE at the time. They got engaged in 2013.

The 71st Primetime Emmy Awards are airing live from the Microsoft Theater in Los Angeles starting at 8 p.m. ET/PT on Fox.