Home » Family Health » Baby Boy on the Way for The Voice's Craig Wayne Boyd: 'The Timing Couldn't Be More Hilarious' 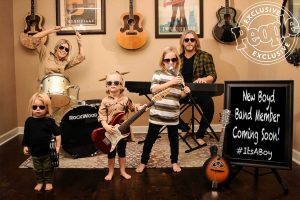 There’s another Boyd baby on the way!

Craig Wayne Boyd and his wife Taylor are expecting their third child together and The Voice season 7 winner’s fourth total, the couple tell PEOPLE exclusively.

In their adorable announcement, the whole gang looks ready to rock out, with Boyd at the keyboard, Taylor on the drums, Boyd’s 7-year-old son Jaxon tackling vocals and the couple’s son Graydon Scott, 19 months, and daughter Dakota Lynne, 3½, on tambourine and lead guitar, respectively.

“New Boyd Band Member Coming soon! #ItsABoy,” reads a chalkboard sign next to the family, who are all wearing sunglasses for their musical session.

“If you have run into us lately, one of the kiddos has probably spilled the beans,” the country singer, 40, jokes to PEOPLE of his wife’s pregnancy.

Adds the mom-to-be, “I am over-the-moon excited to be adding another addition to Boyds R Us!”

Baby Boy on the Way for Craig Wayne Boyd

“We are so excited about this little guy and the timing couldn’t be more hilarious,” Boyd adds, noting that the baby’s due date is the same week as his dad and sister’s joint birthday (Dec. 31) — three days after Graydon turns 2.

“One big birthday party for all! The man upstairs sure does have a sense of humor,” says the “My Baby’s Got a Smile on Her Face” singer.

Jokes Taylor, a modeling agent, of being apart from her husband during their seemingly lucky month of conception, “If anyone has a place for Craig to rent the month of April, I’m looking to book him a reservation!”

The parents-to-be share with PEOPLE that Jaxon is practicing for his new baby brother by changing Graydon’s diapers, while Dakota is constantly asking questions about her new sibling’s arrival — and asking if her mom’s belly includes a kitchen for him to be able to eat!

Boyd and Taylor became engaged in August 2015 and married in April 2016, four months after welcoming Dakota.

Following Graydon’s birth — which the couple shared exclusively through PEOPLE — the fourth-time dad-to-be was already noting how “the last week of December will forever be a huge week in the Boyd family.”

In July 2017, Boyd and his wife shared a hilarious photo with PEOPLE to announce they were expecting. It depicted Jaxon holding onto a rope binding the parents-to-be, Dakota perched on her dad’s shoulders and “IT’S A BOY!” written on a window in blue.

“We will soon be #outnumbered #babyboyd,” read a sign next to the family.