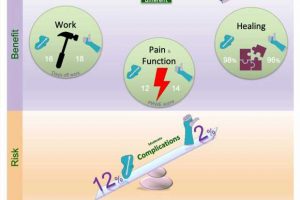 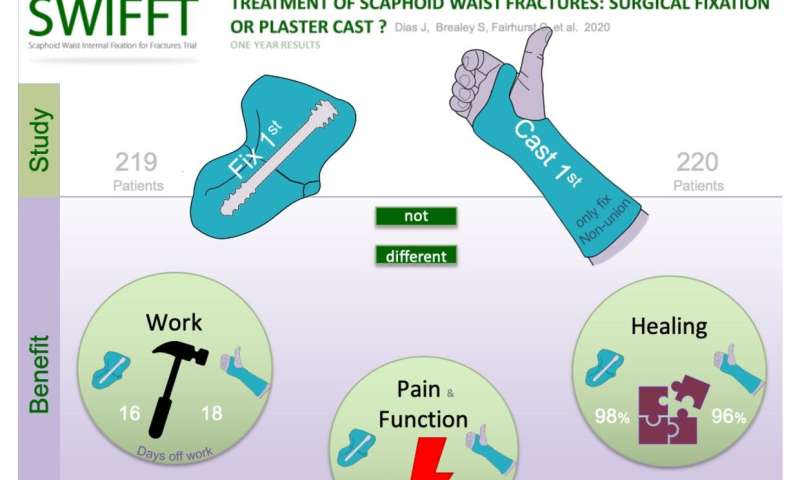 A study led by University Hospitals of Leicester NHS Trust has found that plaster casts are just as effective at healing scaphoid waist fractures in the wrist as surgery. The SWIFFT trial, funded by the National Institute for Health Research, concludes that for a scaphoid waist fracture in the wrist a plaster cast should be used in the first instance, with surgery only being considered if the bone doesn’t heal. The findings are published in The Lancet today.

Fracture of the scaphoid bone (one of eight small bones in the wrist) is common in young, active people, caused by a fall on the hand or the hand being suddenly forced backward. The research suggests that by opting for a plaster cast, patients can avoid the risk of surgery, while hospitals can keep service delivery simple and cost effective, without compromising patient outcomes.

439 adult patients with a scaphoid waist fracture of the wrist were enrolled between 2013 and 2016 from orthopaedic departments in 31 NHS hospitals across the United Kingdom. Patients who agreed to take part were randomly assigned into two arms of the trial: either to have surgery to hold the broken scaphoid with a special screw, or to have the wrist held still in a plaster cast (with surgery offered after six weeks to those that were still not healed).

After one year from the initial injury, patients were measured on a number of factors, including wrist pain and function, bone healing, complications from treatment, and average days of work lost.

To assess their wrist pain and function, patients were asked to complete a questionnaire which had a total score of between 0 and 100, where a higher score indicated worse pain and function. At one year, patients in the surgery group had a score of 12, compared to a score of 14 in the plaster group, showing no significant difference in patient-reported outcomes. The study days of work lost were comparable between the two groups (17 days for surgical patients, and 18 days for plaster cast patients). There was also no significant difference in the number of fractures that did not heal properly between the two patient groups (2% for the surgical group; 4% for the plaster cast group). However, patients who had surgery were assessed by the hospitals to have more complications following treatment (12%) than the plaster cast group (2%). 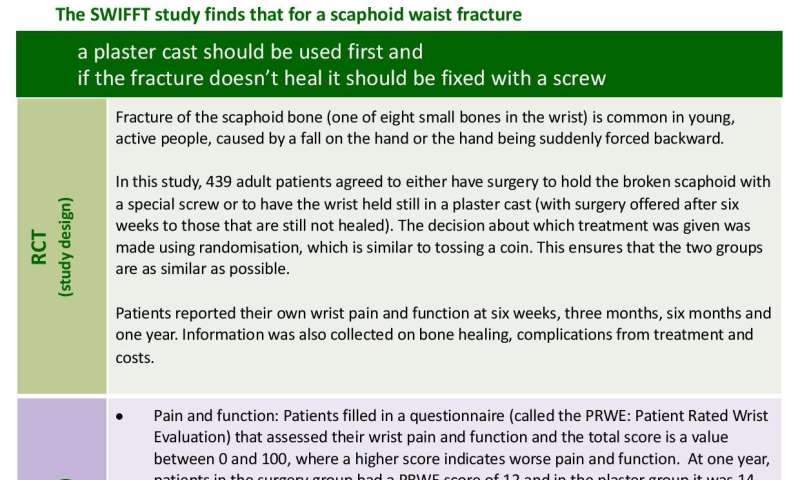 “This study confirms that putting a wrist with a broken scaphoid in a plaster cast provides as good healing as surgery, so long as the few that do not re-join are identified and fixed by the medical team. Fixing the scaphoid by surgery does not speed up healing and the time taken to return to work is the same as when a cast is used. Despite a recent rise in surgical procedures to fix scaphoid fractures, there is no evidence that surgery produces better outcomes for patients.

“With our research, patients and medical practitioners can be confident that we can treat patients with this fracture safely and effectively in a cast, resorting to surgery only when the bone doesn’t heal”.

The researchers also considered the health economics of surgery versus plaster cast. Over the year, the cost of surgery to the NHS was significantly higher at £2,350, compared with the cost of plaster cast treatment, which was £727 for each patient.

The study team collaborated with the University of York Trials Unit on the design and delivery of the trial. Dr. Stephen Brealey, trial manager in York, said: “We are incredibly grateful to the patients who took part in this important study, which shows with their support what can be achieved through research to ensure patients get the best care by informing doctors’ decision-making, which also benefits the NHS.”