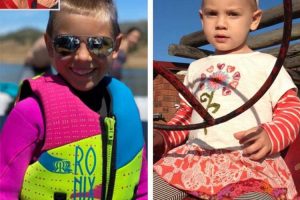 Pink and Carey Hart's older child and only daughter turned 9 on Tuesday, to the tune of a touching tribute from her dad that accompanied a side-by-side photo set of Willow as a toddler and now, sporting a giant smile (and a shaved head!) in the recent photograph.

"My sweet daughter willow. Where do I start," Hart, 44, began his caption. "You have shown me what love of a child is all about. You changed my life from the moment your mama was pregnant. I always wanted to be a father and thank you for choosing me as your papa. You impress me everyday you walk this planet."

"You are smart, thoughtful, compassionate, full of piss and vinegar, physical, and a lil s—!!!!" he joked. "One of the biggest joys I have with you is watching you grow into your own independent person each day that passes. You are gonna change the world one day, munchkin. I could not [be] more proud and in love with you."

"Have a great 9th birthday," Hart continued, ending with a sweet shout-out to his wife: "Thank you mama @pink for cooking a good one."

Although Willow has since embraced the fully buzzed look, she first debuted a partially shaved head back in the fall, when her motocross-racer dad shared a photo of the haircut in progress.

"Loving my punk rock daughter," wrote Hart. "Remember everyone, fly your own flag. There is no box to be put in. It's better to be your own self. Own it, and love it. And if anyone has a problem with it, tell them (politely) to move on. Cant wait to see the woman you grow up to be. I have a feeling you are gonna be strong, fierce, [compassionate], and caring. I'm so proud of you, Willow."

In January, Pink, 40, shared images of Willow and her little brother  Jameson Moon, 3, rocking their best Disney-themed outfits at one of the company's theme parks. For Willow, that came in the form of an edgy version of Cinderella that showed off her partially shaved head.

Pink recently made headlines following the killing of George Floyd, re-posting a portion of Billie Eilish's powerful statement slamming the "All Lives Matter" movement in the wake of Floyd's death. The 46-year-old truck driver was killed in Minneapolis on May 25 after a white officer pinned him to the ground with a knee on his neck.

When hateful messages appeared in the comments section of her post, Pink was quick to shut them down.

"Totally get where you're coming from. HOWEVER, as a person with a lawyer brain, I have to say … when you single out one race and say 'that' race matters. You ARE implicitly saying other races don't matter as much. It is automatically inferred," one commenter wrote. "I believe it does this situation a disjustice [sic] by putting it in the #blacklivesmatter category. This could happen to ANY ONE OF US! THAT is the atrocity! THAT is the REAL issue. It is not about race."

In response, the singer hit back, "You are the epitome of white privilege and the saddest part is that you don't even hear yourself and probably never will."