Home » Health News » Ciara Says She Lost 20 Lbs. Since the Start of Her Career: 'I Feel Like I Can Conquer the World'

Ciara Says She Lost 20 Lbs. Since the Start of Her Career: 'I Feel Like I Can Conquer the World' 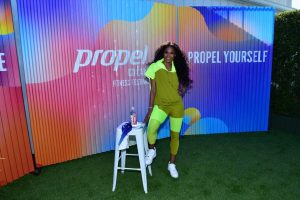 Ciara says she didn’t start focusing on fitness until after her career skyrocketed.

“When I first started in my career, I weighed 20 lbs. more than I weigh now,” the star, 33, tells PEOPLE. “That was the first time I got introduced to eating five small meals a day to impact my workout.”

The “Level Up” singer, who brought her personal trainer, Decker Davis, to the Propel Co:Labs Fitness Festival in Santa Monica on July 20, says that eating small meals still works for her today, nearly 15 years later.

“When you’re eating small meals, your body starts to function like a well-oiled machine,” Ciara says. “You’re using the restroom regularly so your body is really on clock.”

But the Texas native (who celebrated her three-year wedding anniversary with NFL player Russell Wilson earlier this month) says she likes to keep it simple — her health and wellness secret? Drink lots of water.

As for her fitness routine, the mom of Future Zahir, 5, and Sienna Princess, 2, likes to mix it up: “It’s a combination of plyometrics (jump training), cardiovascular work, and also weight lifting all in one kind of thing,” she says. “It’s a full on circuit that allows me to hit every target area.”

She admits that her workouts get more “intense” when husband Wilson joins in: “It’s … what I like to call ‘good love competition,’ ” Ciara says. “We motivate each other and it’s really fun.”

In January, the Beauty Marks Entertainment founder opened up about finally learning to love fitness.

“Just a few years back I decided to commit to my fitness and health lifestyle differently than I had before,” Ciara told PEOPLE. “I used to spot train a lot. I used to train for the occasion, like if I had to do a video, or if I had to get ready for tour, I would get ready for those moments, but it wasn’t as much of a daily thing for me.”

That system left her feeling like she wasn’t mentally committed — or happy — with her workouts. Ready for a change, Ciara started working out consistently, with well-rounded workouts four days a week, alongside planned days off to let her body heal.

“What I learned by having that daily commitment — and it doesn’t mean that I go in the gym every day, because you need to let your body recover — but when I started to become more consistent, I realized how much better I felt, and how much easier my workouts became because it wasn’t so aggressive,” she revealed. “That’s game-changing on the body and the mind. I feel like I can conquer the world on the days I work out, and it’s very rewarding.”

Dr. Sanjay Gupta Says the Keto Diet Can Help You Lose Weight Quickly — But It's Not for Everyone