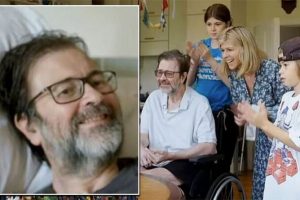 Kate Garraway says she is 'lucky' to have Derek Draper

Derek Draper, 53, the former political lobbyist married to Good Morning Britain host Kate Garraway, 54, is now back at home after spending more than a year in hospital due to severe coronavirus complications. Both he and his wife contracted the virus in March 2020, though his condition was set to worsen dramatically. What happened to Derek?

Since the beginning of Derek’s health journey, Kate has kept her followers up-to-date with her husband’s condition.

Over the course of the last two years, Derek has suffered from brain inflammation, multiple organ failure and damage to the lungs, kidneys, heart and liver.

Although he is now back at home, his recovery is far from complete, with the GMB presenter revealing Derek still required round-the-clock care.

This evening, Kate will show an honest look at what life is like now in the ITV documentary Caring for Derek.

During the show, Kate said: “We have to make this real, as this is the reality of life for people who are caring, and it’s not pretty.”

A timeline of Derek Draper’s journey with COVID-19

Towards the end of March 2020, in the early stages of the pandemic, both Derek and Kate contracted coronavirus.

Although Kate’s case was much milder, Derek began to experience more serve symptoms.

On April 3, a spokesperson for Kate announced Derek had been admitted to intensive care.

Kate remained self-isolating at home with their children after displaying coronavirus symptoms.

Unfortunately, testing was not as widely available for mild cases at this stage, and so Kate had not been tested.

Kate shared an update confirming Derek had been placed in an induced coma by medical staff.

Hopes were that the coma would help his body to fight the effects of the virus.

According to Kate, she would regularly chat with him and even play music for him over video calls, uncertain whether or not he could hear her.

In early June, Derek was confirmed to have fought off the COVID-19 infection.

However, his body was left badly damaged as a result and the virus has left holes in his lungs and heart.

Speaking on GMB in her first interview following Derek’s illness, Kate said: “The doctors manage one bit extraordinarily well and there seems to be a flicker of hope, and then other things emerge and they’re fighting that.

“It’s affected him from the top of his head to the tip of his toes.”

She added: “He’s now Covid-free so he’s testing negative for the Covid virus. The fight with the virus has been won and he’s still here.

“But it’s wreaked extraordinary damage on his body and we don’t know if he can recover from that.”

She is warned that he may remain in a coma for up to one more year.

June 6, 20202 – Derek open’s his eyes for the first time, doctors try to remove him from the coma

Derek’s coma-inducing medication is stopped, but he does not wake up initially.

Kate says he has opened his eyes a few times, sparking hopes he may come round.

However, doctors have warned that he may never wake up.

Doctors say Derek is no longer in a “deep” coma, although Kate says he is still in a “minimally conscious” state.

Lockdown rule relations mean that Kate is able to see her husband in hospital.

She, along with her children, had not seen Derek for four months due to the strict lockdown rules.

September 6, 2020 -Derek is reported to have lost eight stone in weight.

This is largely due to muscle wastage from being hospitalised for so long.

Kate describes seeing him for the first time as “a shock”.

Kate said: “Even now it remains hard to describe how I felt when I saw him. It was like a white ball of shock so bright you want to put your hand up to your eyes to protect them.

“My husband was unrecognisable. Legs like sticks, thinner than I’d thought his previously big frame could make possible. His arms too – how could muscle, flesh and fat become so small? Even his bones should be bigger than that, surely?”

He had been the UK’s longest-running Covid patient.

Derek wakes up from his coma and says his first word: “Pain”.

Kate described the moment as “heartbreaking”.

She said: “It happened when the nurses were moving Derek, as part of his treatment, to trigger the sensation of gravity because he’s been horizontal for so long.

“As they were shifting him, they asked if he could feel anything — not expecting a response as he hadn’t previously. But suddenly he mouthed in a whisper, ‘Pain’.”

After a gruelling 214 days in hospital, Derek’s ventilator is removed and he is able to breathe on his own, though still requires assistance at night.

When the Prime Minster reintroduced strict restrictions, Kate was once again unable to visit her husband in hospital.

The GMB presenter said she was worried a lack of visitation may cause him to deteriorate.

She added that Derek was now the longest patient who had been in the ICU throughout the entire pandemic.

Kate says that the lack of visitation has slowed down the progress of her husband’s recovery.

She said: “The very worst moment was when they said he could be locked in forever. And I just thought this is a horror story.

“I don’t know if he’ll ever have any kind of life again. We just don’t know. The change in his body is shocking.”

The doctors told her it was “highly unlikely” Derek would make a full recovery.

Kate shares the couple’s journey in a documentary, during which she makes their home wheelchair accessible to accommodate Derek’s return.

At this time, she says her husband has “no muscle left”.

In early April, Derek returns to his family home after spending over a year in the hospital.

His recovery is described as “long and gruelling”, and Kate reveals Derek will not receive 24-hour care.

May 4, 2021 – Derek has regained a sense of smell and converses more often

Kate believes time at home with the family is helping Derek’s progress.

She says the couple have shared some “lovely normal moments” together.

His sense of smell has also returned.

“In fact, one of the nurses texted me and said ‘oh my goodness, I’ve just heard Derek speak’.

“I said ‘oh my god, what did he say?’ and she said ‘Billy you smell of Monster Munch’.

“It’s not quite the profound thing…but she said that he did smell of Monster Munch.”

Ahead of her documentary, Kate reveals she and her husband took an 11,000 mile trip to Mexico for specialist treatment to air his recovery.

Derek underwent extreme oxygen and pressure tests ahead of the flight to ensure his body could cope.

Kate told The Sun: “It took weeks and weeks of planning, and when I told Derek about this place he was excited. He is just so desperate to get better – he will do anything he can to make that happen.”

Caring for Derek is on ITV tonight at 9pm