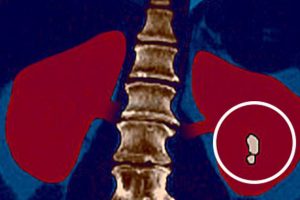 Patients with agonising kidney stones will now be offered shockwave therapy within 48 hours of seeing a doctor.

The procedure, which can be carried out without an anaesthetic, uses a machine that directs blasts of ultrasound energy at the kidneys. The waves break up troublesome crystals which cause a blockage in the organs, without damaging healthy tissue.

The stones can then pass out of the body painlessly through urine. 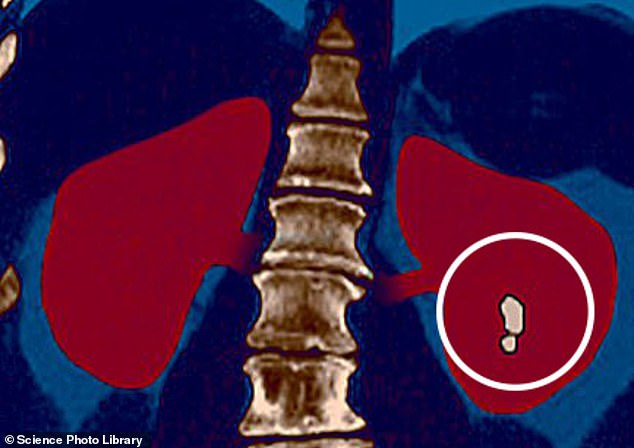 These kidney stones, circled, shown on a CT scan can be treated using shockwave therapy 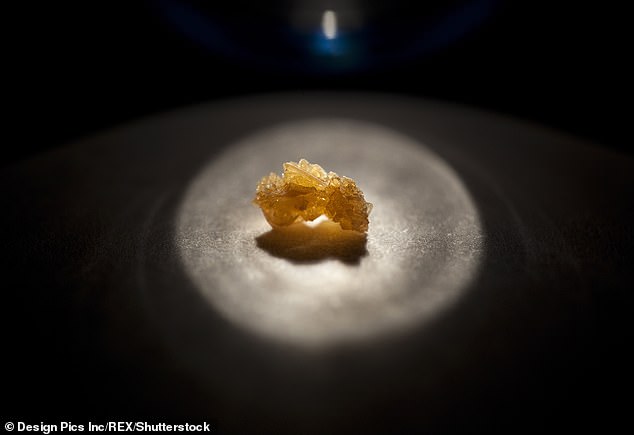 Given early, shockwave therapy, or lithotripsy, may save thousands of sufferers from developing infections or needing invasive surgery later on, according to a draft document from health watchdogs the National Institute for Health and Care Excellence.

One in 11 Britons will develop a symptomatic kidney stone at some stage. The condition is caused by waste products in the blood forming crystals inside the kidney – in time they can form a hard, stone-like lump.

Although smaller ones pass painlessly through the body, larger ones can cause excruciating pain as they start to pass down the ureter, the tube carrying urine from the kidneys to the bladder.

Kidney stones can run in families – and the risk is increased by a lack of fluids, some medications and conditions including inflammatory bowel disease, thyroid problems and kidney disease.

The number of patients suffering kidney stones is rising, although experts are not sure why. Some blame obesity and warmer climates due to global temperature increases – and waiting times for surgery are growing too.

At present, there are two other common ways of treating the condition. Ureteroscopy involves passing a fine tube through the urethra into the bladder, and then into the ureter – through this, instruments can be used to remove a stone causing the blockage. And percutaneous nephrolithotomy is a keyhole procedure in which surgeons make a small incision in the back and either remove or break up the stone.

Both options involve a general anaesthetic and a hospital stay, and patients may have to wait six weeks or more for an operation.

During this time, they may need to be fitted with an uncomfortable 2.5cm-long stent, a hollow tube which opens a channel from the kidneys to the bladder.

Stewart Williams, 51, a photographer from Croydon, South London, was diagnosed with kidney stones in May, after slight stomach discomfort quickly turned to shooting pains across his abdomen.

‘It was simply excruciating,’ he says. ‘I took the Tube to A&E at St Thomas’ Hospital and thought I’d walk the last stretch, but the pain was so bad that I had to take a taxi. It felt like I was being stabbed.’

After arriving at 10pm, he saw a doctor a couple of hours later and was given a CT scan.

The scan showed a large kidney stone measuring 1cm by 1.5cm, lodged in the ureter. And because the stone was partly blocking urine flow from the kidneys, Stewart was developing a kidney infection too.

Doctors suggested putting a stent alongside the stone until it passed, so that urine could drain away – and if that failed to work within four weeks, they could laser the stone to break it up.

‘I was in agony so it was a relief when they told me they could also offer lithotripsy to break up the stone so that it would pass naturally,’ he added.

Susan Willis, consultant urologist at Guy’s and St Thomas’ NHS Foundation Trust, who treated Stewart, said: ‘Lithotripsy is a well-established treatment which is cheaper than surgery and means patients don’t need a general anaesthetic, and means they can be treated quickly too.

‘Hopefully now more patients can be referred for lithotripsy and treated quickly.

‘Since we select patients carefully, we have a 100 per cent success rate.’

Stewart had lithotripsy at Guy’s the next morning, taking powerful painkillers before lying on a rubber mat as shockwaves were beamed into his back.

About 3,000 shocks are delivered during the 60-minute procedure.

‘It felt like a steady ping, ping,’ he says. ‘But since I’d had no sleep and also had some sedation, I actually fell asleep halfway through. And because there was no general anaesthetic, I could leave for a cup of tea straight afterwards.’

An X-ray two weeks later showed the stone had not passed completely, so he had another three sessions. He passed a small piece of stone which looked like black grit, and by mid-August the stone had disappeared completely.

‘Now I drink lots of water to dilute the urine and make it harder for stones to form,’ he says.

‘With luck I’ll never have another stone, and it’s wonderful to have it disappear without surgery.’

Stars of new chronic illness documentary say they were ‘tricked’ 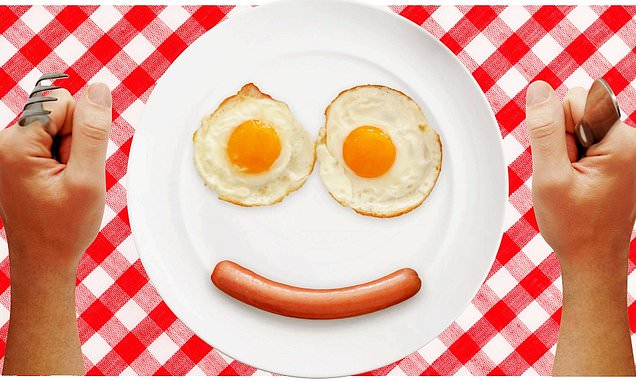 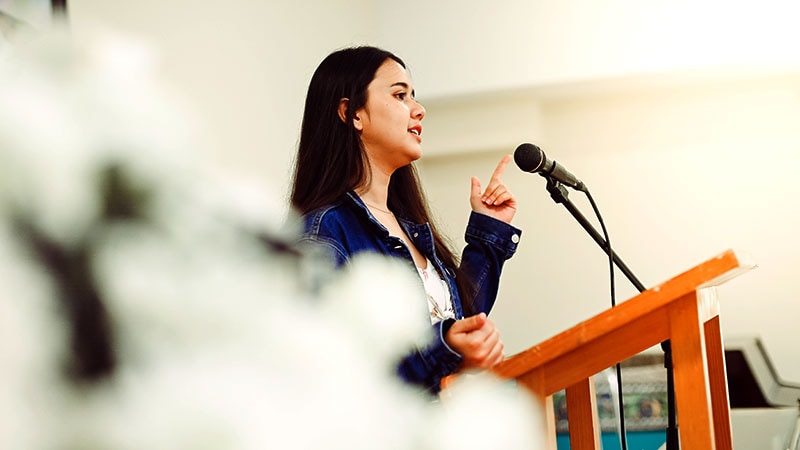 Vaccine Hesitancy Is On the Rise — & Experts Are Sounding the Alarm