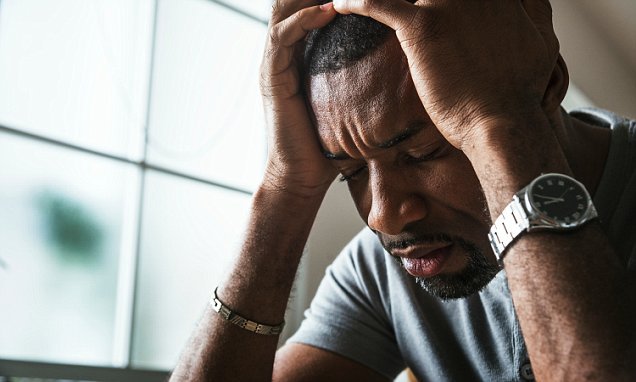 New dads suffer from postnatal depression just as much as mothers, study finds

New dads suffer from postnatal depression just as much as mothers: Psychologists warn lack of sleep and fear of being a good parent drives crippling anxiety in fathers

Postpartum depression is just as prevalent among new fathers as new mothers, a new study warns.

Discussing the condition has become less taboo for women in recent years, in part thanks to celebrity mothers opening up about their experiences, urging fans ‘it’s ok’.

But a new study presented today at a meeting for the American Psychological Association warns men are not included in this progress – and yet, new research shows the rate of fathers suffering depression after birth is just as high.

For women, it is spurred by a myriad of factors, including hormonal changes, lack of sleep, and anxiety about protecting their child, as well as body changes after enduring nine months of pregnancy, and grueling labor.

Men, the researchers say, are just as emotionally impacted by the fear of adequately caring for their child and lack of sleep – plus, uncertainty about their role in the family – to an extent that can cause mental illness so severe is disrupts their life. 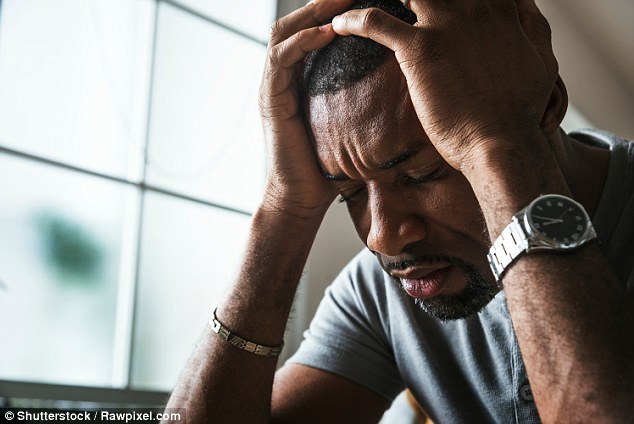 Discussing the condition has become less taboo for women in recent years. But a new study presented at a meeting for the American Psychological Association warns men need this too

Lead author Dr Dan Singley, of the Center for Men’s Excellence in San Diego, said: ‘Much has been written about women’s experiences of pregnancy and postpartum, most of it exploring negative reactions, ranging from clinical depression to postpartum psychosis, and attributing them to unique physical changes women experience during pregnancy.

‘But the incidence rate of depression is comparable between new mothers and fathers.

‘Postpartum depression can no longer be seen as primarily a pathological variant of female reproductive processes. The existing paradigm must be modified.’

The findings follow a study of 447 new Swedish fathers last year that found more than a quarter showed significant levels of depression.

The phenomenon is believed to be becoming more common as fathers face the same pressures as mothers – having to combine work pressures with parenthood.

But while women are often asked a series of questions that screen for postnatal depression, the mental health of fathers is rarely assessed.

Dr Sara Rosenquist, of the Center for Reproductive Health Psychology, in Cary, North Carolina, who spoke at the same conference, said: ‘The predominant narrative has attributed these experiences to hormonal changes and fluctuations specifically related to pregnancy and birthing.

‘It is highly unlikely that the hormonal disruptions of pregnancy and birthing would explain the whole picture if fathers and adoptive parents all experience postpartum depression at the same rates.’

Sleep deprivation has been shown to be the single most predictive risk factor for anyone, at any time, said Dr Rosenquist.

The father’s lack of sleep and the needs of an infant are exhausting, and time spent away from work can contribute to anxiety.

New fathers can sometimes struggle with gender role conflict, should they have trouble conforming to what society says is the traditional role of a father, and may also question their ability to be a competent parent.

He said: ‘Recent research has shown that roughly 10 percent of new dads experience postpartum depression, and up to 18 percent have some type of anxiety disorder.

‘Unfortunately, few psychologists receive focused training regarding identifying, assessing or treating common men’s issues in the period from conception to a year or so post-childbirth.

‘Because men tend not to seek mental health services during this period, the lack of scholarly attention to this vulnerable group reflects a commonly overlooked public health disparity.’

And that rate of 10 percent is about in line with what adoptive mothers experience, according to Dr Rosenquist.

Anthropologists have long observed men sometimes exhibit symptoms reminiscent of pregnancy when their partner is pregnant, such as nausea, heartburn, abdominal pain, bloating or appetite changes.

There is also evidence, in both human and animal studies, that close contact with a pregnant partner can induce hormonal changes that enhance and accelerate the onset of fatherly instincts in some men.

Men who experience sympathetic pregnancies also have measurably higher levels of prolactin, the hormone that allows women to produce milk, and experience a temporary drop in testosterone just after birth.

In calling for increased awareness of the problem, the researchers recommend regular screening of new and expectant fathers for signs of depression, especially if the father or mother has any history of mental health problems.

Added Dr Rosenquist: ‘But screening is not enough. Screening does not distinguish between major depressive disorder, which sometimes requires treatment with medications in addition to psychotherapy, and adjustment disorder, which is more commonly better treated with psychotherapy alone.’

Identifying depression in men can be a challenge, though, because the symptoms are different.

Another thing men can do to is rely on friends for support during pregnancy and post-childbirth.

Dr Singley said: ‘Fathers who maintain solid social support networks experience a buffer from the conflicts and demands associated with parenting while also providing role models which facilitate a sense of competence as a parent.’