Stars of new chronic illness documentary say they were ‘tricked’ 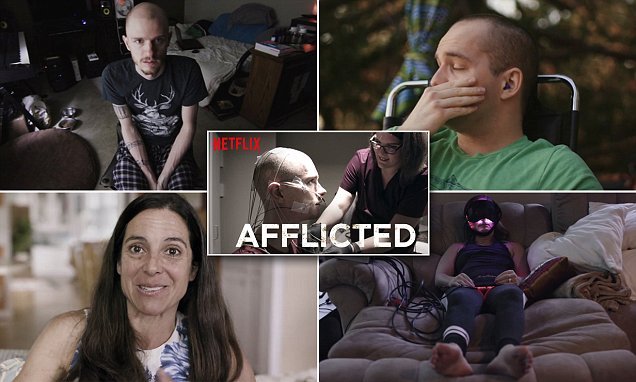 The subjects of the new Netflix documentary series about chronic disease, Afflicted, have come out in force against the film, asserting that its makers misrepresented their conditions as ‘psychosomatic.’

In order to be cast in the show, the subjects were all required to have a medical diagnosis from a physician.

They were also required to undergo psychiatric evaluations prior to filming.

But many of them now say that the production and editing warped their stories and portrayed their physical conditions as mental illnesses – a conflation that has led to stigma the subjects hoped the film would fight. 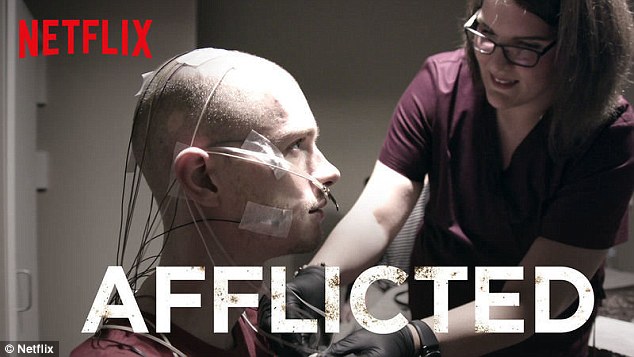 The subjects of the new Netflix documentary series about chronic illness say the producers misled them about how they would be portrayed, editing the show to make them look ‘crazy’

It was produced for Netflix by the Los Angeles-based documentary company Doc Shop, which works with big names like National Geographic, CNN, Discovery, A&E, AMC and Travel channel.

The company produced the controversial reality series Intervention and gained acclaim for the 2015 Rashida Jones-produced Hot Girls Wanted: Turned on.

Some of them have been given one diagnosis that explains the network of their symptoms. Doctors have told others that they have as many as a dozen conditions, acting in collectively against their health.

But they have all been diagnosed with something, but there isn’t a clear cure for it.

Among the toughest challenges facing chronic illness patients like Jake, Star, Jill, Jamison, Bekah, and Pilar is the fact that some of their worse symptoms are ‘invisible.’

One of the series’ subject, Jamison Hill, tweeted that he and his co-stars were told their diagnoses would be treated as legitimate, but that they feel betrayed by final product 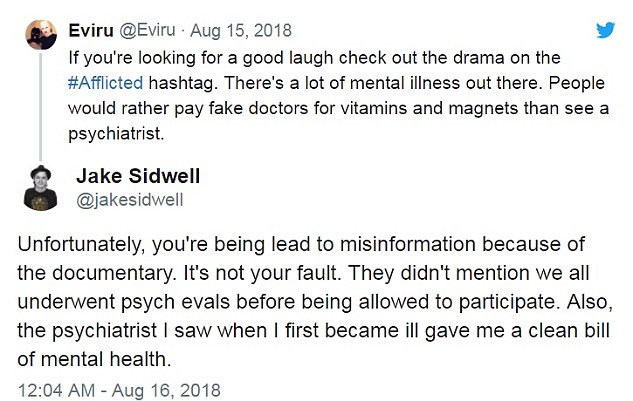 The subjects, including Jake Sidwell, say they have been bullied since Afflicted aired. he claims in tweet that the subjects all had to take psychiatric evaluations and prove their diagnoses

Experiences like pain and fatigue don’t show up on CT scans, but they can be debilitating.

However, the difficulty of measuring them has long led people to doubt or even dismiss chronic illnesses like fibromyalgia, chronic fatigue syndrome, and Lyme disease as manifestations of stress or mental illness.

The stars of Afflicted are now claiming that the Netflix production that they agreed to participate in misrepresents them and implies that their illnesses may not be real.

Several cast members and their loved ones penned collective and individual essays on Medium.

One, Jamison Hill, posted an hour-long YouTube video about the making of the show and how he believes audience members were misled – as were they.

‘Man, if only you knew how we as subjects were misled … now that is just unjust,’ Jamison Hill, who has Lyme disease and ME/CFS (chronic fatigue syndrome) tweeted. 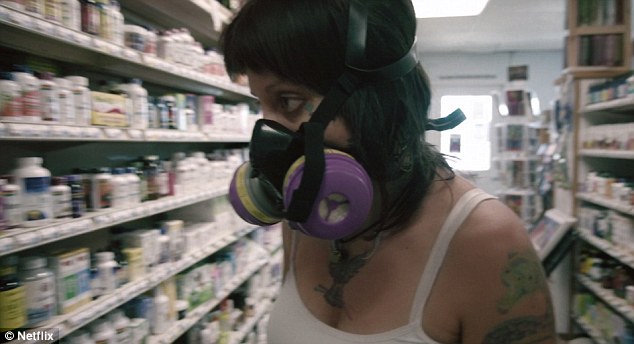 Bekah Dinnerstein has mold sensitivities, but she and partner penned an essay together claiming that the scientific evidence of her condition was omitted from the series

He and the other subject who have spoken out claim that its producers pitched the show to them as providing a ‘compassionate’ lens on their conditions with the purpose of informing audiences of their often-misunderstood illnesses.

Instead, ‘I had no idea that the “documentary” would be a reality show that asks the question “is this real? Are they crazy?” Had I known, I would never have signed up,’ Jill, who suffers from chemical and mold sensitivities, wrote in her individual Medium essay.

Before filming started each subject underwent a psychiatric evaluation – and at least one – Jake – says that he was separately given a ‘clean bill of health’ from a psychiatrist when he first fell ill with Lyme disease.

But in the series, he is shown seeing a doctor after he becomes concerned a lump in his leg could be a blood clot.

He asks the doctor, ‘you feel it, or am I crazy?’ and the conversation is cut short because the episode was edited to end there. 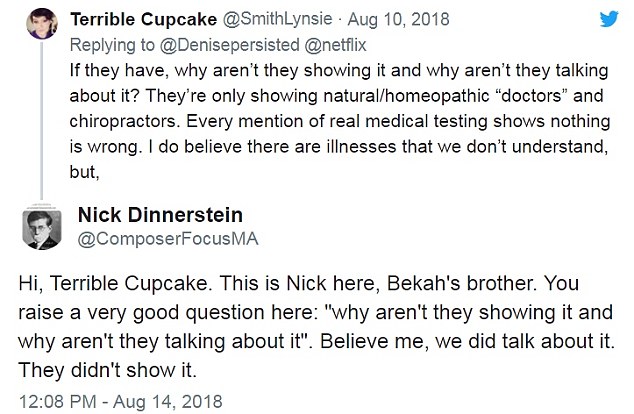 Audience members questioned the legitimacy of the diagnoses in Afflicted, and why no proof was shown in the docuseries. Bekah’s brother defended her in a reply tweet

It isn’t until the next episode that the emergency room doctor rules out a blood clot, and does suggest anti-anxiety medication.

But moreover, Jake, his fellow cast members – and even some audience members – have all said that it’s the editing and framing of the docuseries that at least plants the question of sanity in viewers’ minds.

The show places an emphasis on the connection between mind and body – it’s even the title of the sixth episode of the series – and the role of that link in chronic illness.

It isn’t an entirely baseless theme to explore: studies of everything from the gut to mental health to cardiovascular systems and cancer suggest that what troubles the body troubles the mind, and visa versa.

But this is not equivalent to saying that all chronic illness is psychosomatic or the result of hypochondriac tendencies.

Regardless of what is presented by Afflicted, or the judgments made by viewers watching the series, its subjects maintain that the producers edited out important elements their story in order to focus a narrative on their psychologies.

‘Many of our concrete diagnoses and test results are excluded from the series,’ they wrote in their collaborative Medium essay.

‘Our conventional medical doctors were not consulted during filming. Even our own skepticism about some of the alternative treatments we pursued (sometimes with the help or at the suggestion of the production company) was carefully edited out, all to craft the most sensationalist narrative possible.’

Daily Mail Online contacted Doc Shop but the production company had not responded at the time of publication.

New blood-thinning drugs ‘could be far safer than warfarin’