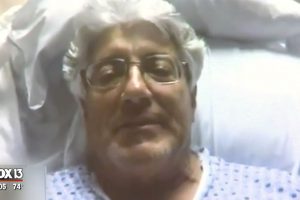 A Florida boat captain is on the mend after contracting a flesh-eating bacteria during a fishing trip with his grandson.

George Billiris took his 10-year-old grandson to a fishing spot on the Gulf of Mexico, just north of Clearwater, Florida, on July 22. One day later, when Billiris was back at work on his charter boat, he started feeling pain around a few scabs on his lower right leg. He later developed a blister in the same area, and had chills and a fever.

“It’s not something you really think about [happening] until it hits you,” he told Fox 13.

Billiris’ family took him to the hospital, where doctors determined that he had contracted vibrio, a type of flesh-eating bacteria common in the Gulf of Mexico.

“Thank god for that, that I’ve got family that care enough to rush me off quickly,” he said. “If I didn’t get treatment, I’d probably be dead.”

Billiris is still in the hospital, where doctors gave him antibiotics to kill off the infection, and doing better. He said he’ll now be more careful in the water.

“I didn’t really pay a whole lot of attention to it … but now I’m more aware,” he said, adding that he was glad it happened to him and not his grandson.

“I’m more thankful that he didn’t contract it, because he was in the water with me and he’s 10 years old.”

Billiris is the eighth person to speak out about contracting flesh-eating bacteria from the Gulf of Mexico, and the seventh from Florida. The risk of developing a life-threatening infection is very low, but people with cuts or open wounds should take caution when going in brackish, warm water where bacteria like vibrio are more common.