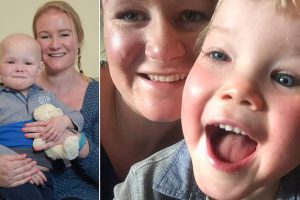 The picture that hides a deadly tumour: Four-year-old was diagnosed with cancer after doctors dismissed his weeping eye as a cold

A four-year-old’s weeping eye turned out to be a rare form of deadly cancer.

Harri Cooke, from Tewkesbury, Gloucestershire, was a happy and healthy toddler before his mum, Carly, 33, noticed he had a weeping eye, last September.

Initially, she assumed her son had a common cold that had caused conjunctivitis.

But it wasn’t until his face began to swell that further tests were conducted in January, this year, and he was diagnosed with Ewing’s Sarcoma – a rare type of bone cancer. 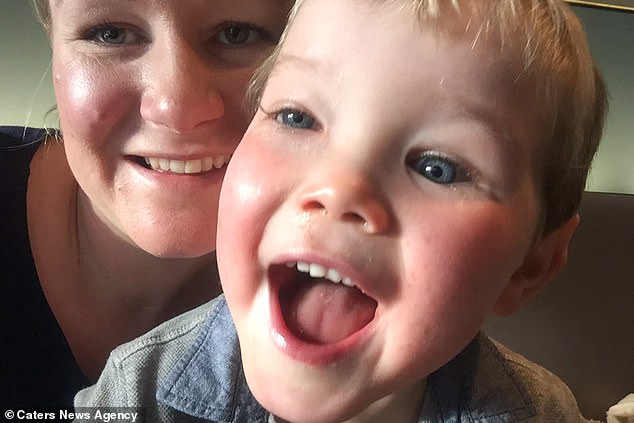 Hidden in plain sight: Harri Cooke, from Tewkesbury, Gloucestershire, can be seen with a weeping eye which was caused by a cancerous tumour which doctors mistook for a cold

‘Harri often had colds so at first I didn’t think much of his weeping eye,’ says Mrs Cooke, a self-employed massage therapist.

‘The doctors agreed that it was likely to be this but as the weeks passed he was believed to have a blocked tear duct.

‘It didn’t seem to bother him, he was so happy all of the time. But when his face began to swell we were referred from our GP to an eye specialist.

‘Once we arrived six doctors turned up, and they all seemed really worried. The NHS did everything they could but we just didn’t realise how serious it was.

‘Harri’s bone structure around his eye had changed, indicating the malicious mass that lay behind.

‘His type was so rare – we were in complete shock. You never think it’s going to be your child.’ 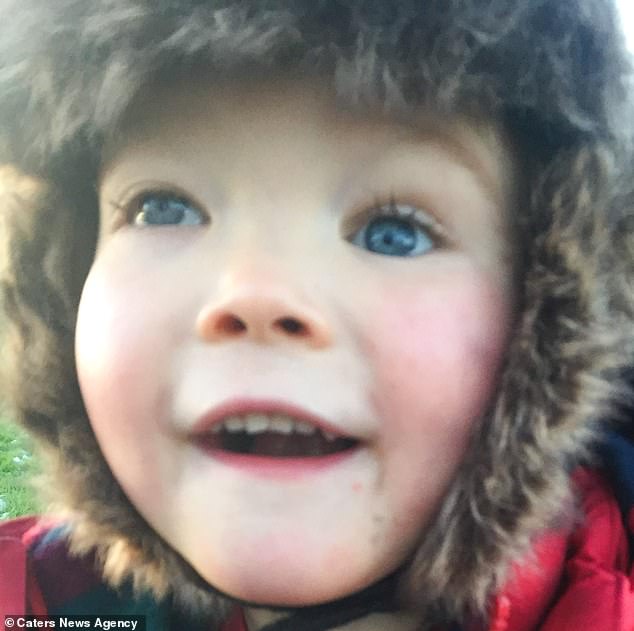 Tell-tale signs: Harri’s bone structure around his eye had changed, indicating the malicious mass that lay behind it – which was successfully removed 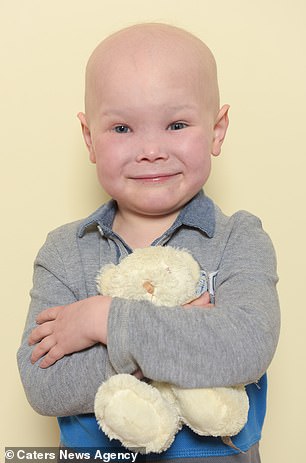 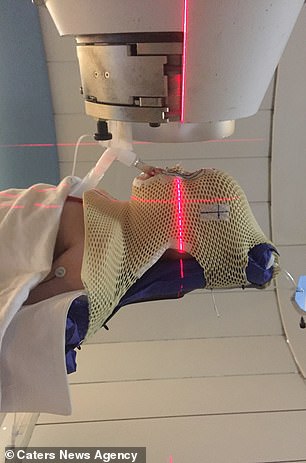 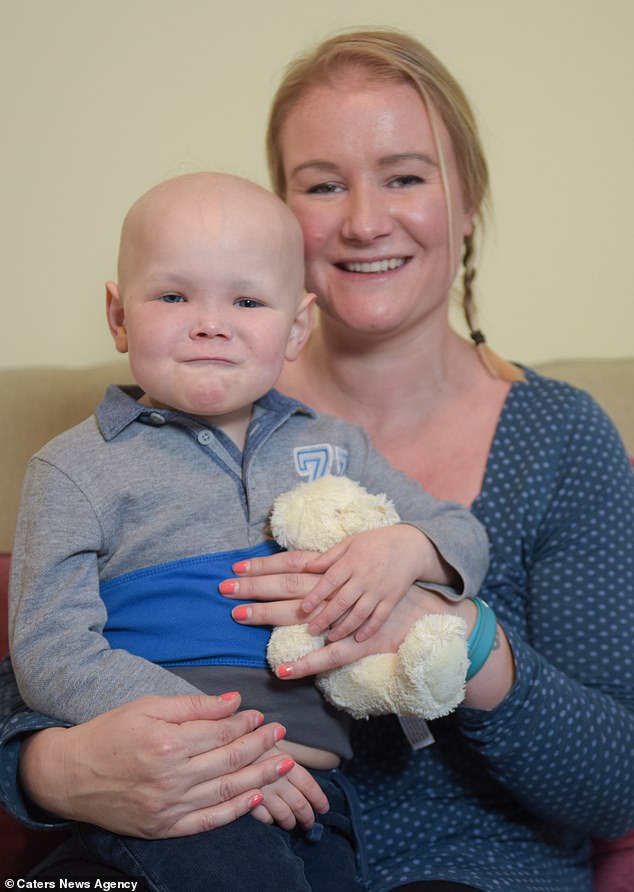 Family ties: Carly Cooke, 33, with her son, Harri, who are now raising awareness of Ewings Sarcoma, which is more commonly found among boys and young men

WHAT IS EWING SARCOMA?

Ewing sarcoma is a rare type of cancer that affects bones or the tissue around bones.

It mainly affects children and young people, with most cases diagnosed in people aged 10 to 20. It’s more common in males than females.

Ewing sarcoma can spread to other parts of the body quite quickly. The earlier it’s diagnosed, the better the chance there is of the treatment being successful.

It can be cured in some cases, but not if the cancer has spread.

The cancer can also come back after treatment, so regular check-ups will be offered to look for any signs of this.

Overall, more than half of people with Ewing sarcoma live at least five years after diagnosis, but this can vary.

Six days later, Harri embarked on a course of proton beam therapy – a type of radiotherapy which uses protons rather than x-rays.

He endured 30 treatments in Florida, USA – which continued every day under general anaesthetic for six weeks. The NHS funded the trip.

He also had fourteen rounds of traditional chemotherapy.

‘Despite everything he was still smiling,’ Mrs Cooke adds. ‘It was so hard watching him go through it, it was like torture.’

Thankfully, it paid off and the youngster is now in remission. But his parents, including his 30-year-old father, James, worry how his treatment will affect him in the long-run.

‘Harri’s treatments means that he could have growth issues, teeth problems and is more likely to have cancer later in life,’ Mrs Cooke added.

‘He’s had to have over 20 blood transfusions to try and save his life.’ 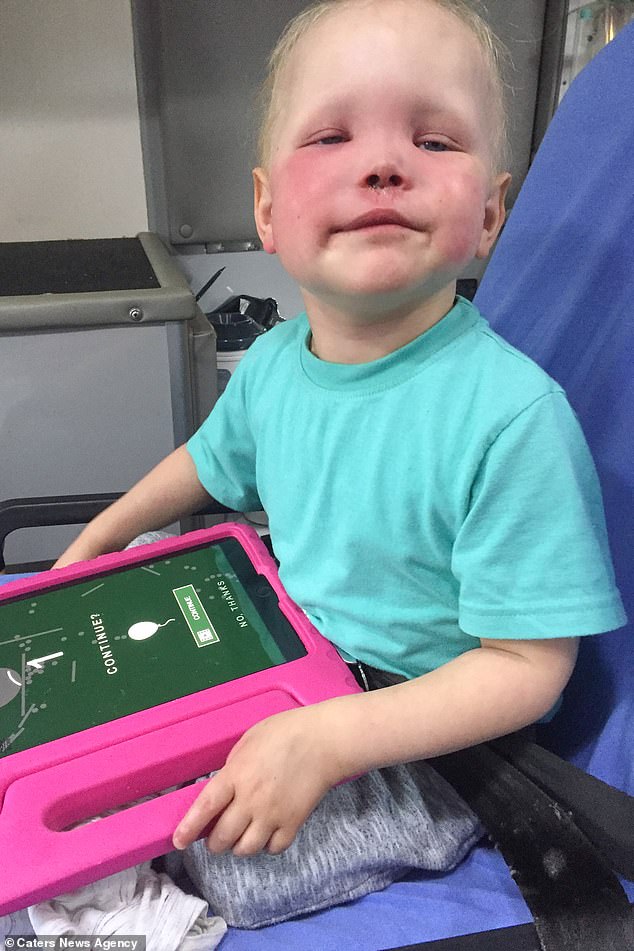 Difficult: ‘Despite everything he was still smiling,’ Mrs Cooke adds. ‘It was so hard watching him go through it, it was like torture’ 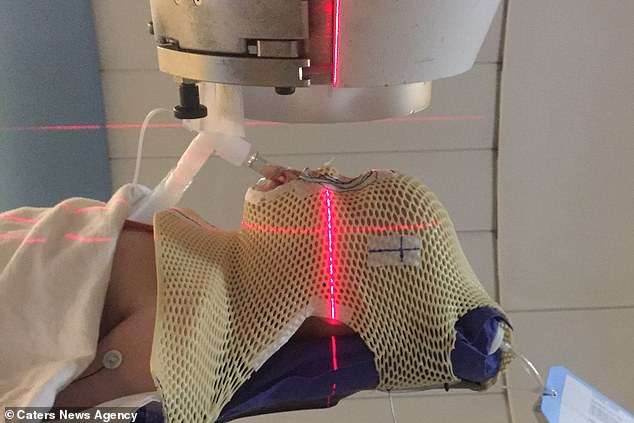 State-funded: Harri seen at the Proton Therapy Institute in Florida, a trip paid for by the NHS

‘I believe that only one percent of fundraising from big cancer charities goes specifically to children’s cancer,’ she added.

‘The medication is so much harsher to children.’

Now, Mrs Cooke is urging other parents to recognise the signs, however small, of this deadly illness, and help raise awareness of how a child can be affected.

‘It’s so rare and unexpected that it’s hard to know what to look for.

‘Blood supplies are currently depleted, and donors are needed for both blood and platelet transfusions.

‘Charities like CLIC Sargent, a charity for children with cancer, are brilliant for helping families and informing them.’ 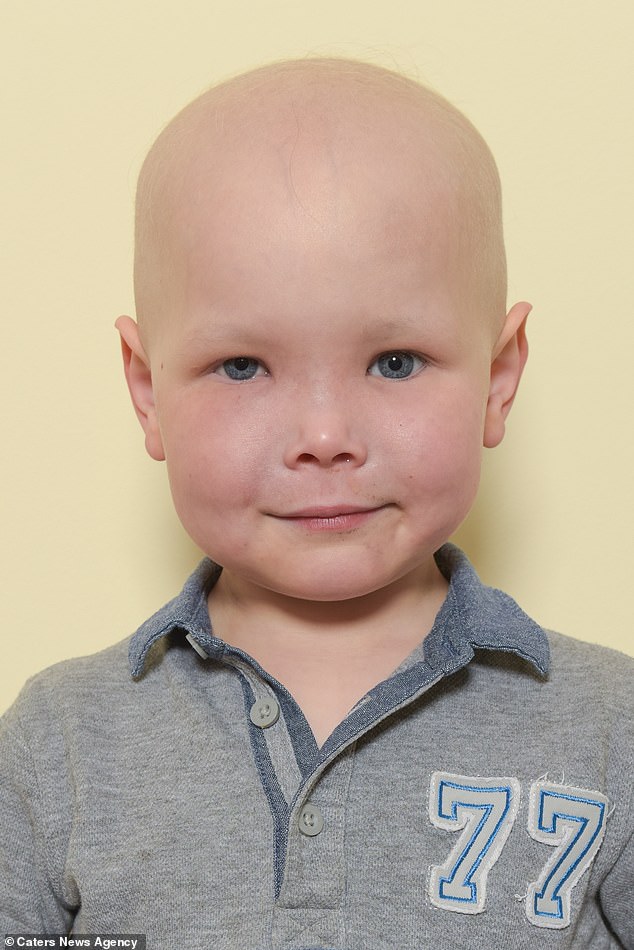 Better now: However, Harri’s parents worry how his treatment will affect him in the long-run

The boy whose clumsiness turned out to be cancer