Home » Health News » Hector thought he was fat, but his ‘beer belly’ turned out to be much more sinister 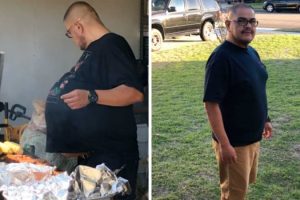 It seemed that each pound was going straight to his gut.

Hector Hernandez said he has always been "a big guy," so he did not notice a problem until a couple of years ago, when his arms and legs started getting smaller, while his stomach was getting bigger. 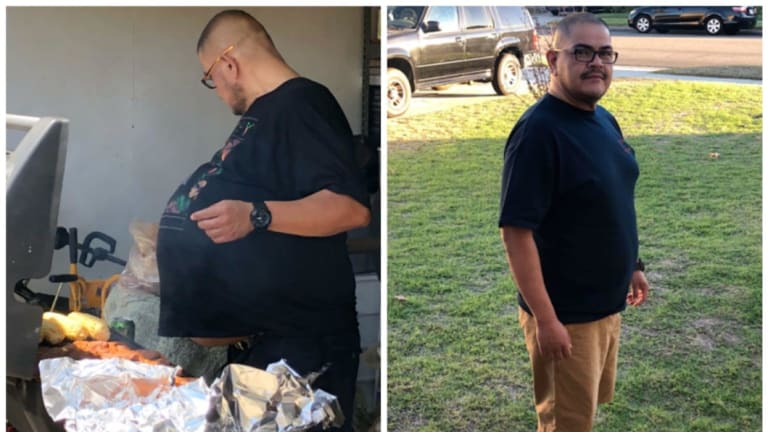 Hector Hernandez before surgery, left, and after surgery, during which doctors removed a 34-kilogram tumour from his abdomen.

The 47-year-old from California, said that he also started struggling with heartburn and constipation and noticed that, at times, he had a hard time catching his breath.

At 136 kilograms, he said, strangers had started to stare, and friends were cracking jokes about his "beer belly," even though he said he rarely drank the stuff.

When he first mentioned the issue to a physician, he said, the doctor brushed him off, telling him some people just carry weight differently than others.

"I just thought I was fat," Hernandez said in a phone interview with The Washington Post.

But Hernandez said his stomach kept feeling "heavy" and "hard" to the touch, so he got a second opinion.

Ultimately, he said, he was diagnosed with a retroperitoneal liposarcoma, a rare but cancerous tumour that forms in fat cells, according to the Mayo Clinic. 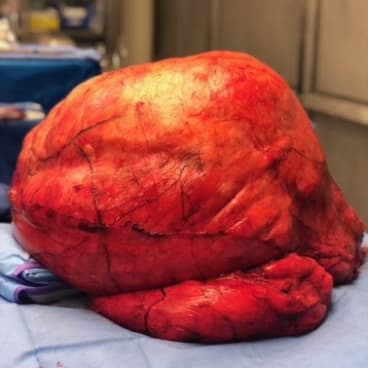 The 34-kilogram tumour was removed after hours of surgery. Credit:Keck School of Medicine, USC

Doctors don't know when the tumour started growing. Or why.

But it weighed 34 kilograms, according to his surgeon.

Hernandez said he did not know how to feel about the tumour or the surgery needed to remove it.

At first, he said, he was "shocked" and "confused" but also relieved that he finally knew what was wrong. "I had a lot of support and prayers from family and friends," he said, noting that they are raising funds to help with his recovery. "I finally left it in God's hands."

Hernandez's surgeon, William Tseng, an oncologist and assistant professor at the Keck School of Medicine at the University of Southern California, said liposarcomas develop over years and can grow to massive sizes, though they do not tend to spread or cause major problems.

'The largest one I've removed'

Tseng, who specialises in sarcomas, said that throughout his career, he has surgically removed dozens of them, which typically average between 9 and 13 kilograms.

"This is probably the largest one I've removed," he said.

During an hour-long surgery over the summer, Tseng removed the tumour, which he said had spared Hernandez's major blood vessels and most organs, though he had to cut out a kidney that had sustained damage.

Tseng said that bleeding is the biggest risk associated with the surgery and that patients can die on the operating table, but there were no complications in Hernandez's case.

The surgeon said Hernandez will not need to undergo chemotherapy or radiation, but because liposarcomas often return, he must have follow-up scans periodically to monitor the situation.

"I was really lucky," Hernandez said.

How Much He Sleeps May Affect His Stroke Risk

Dining Out With Allergies Is Tough, But These Steps Can Help
'beer, Be, Belly, But, fat, He, Hector, His, more, Much, Out, sinister, thought, to, turned, Was
Latest Posts