Home » Health News » Lactating but not pregnant: Causes and symptoms

Lactating but not pregnant: Causes and symptoms 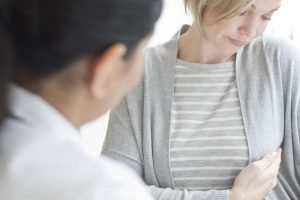 This form of lactation is called galactorrhea. Galactorrhea is unrelated to the milk that a woman produces when breastfeeding.

People may worry about unexpected nipple discharge, but there is no link between galactorrhea and breast cancer.

In this article, learn about the possible causes of lactating without being pregnant or breastfeeding, as well as when to see a doctor.

Causes of lactation without being pregnant

The hormone prolactin causes lactation during pregnancy and while breastfeeding. People who have galactorrhea may produce too much prolactin.

The pituitary gland, which is a small gland at the base of the brain, makes and regulates prolactin and several other hormones.

Problems with the pituitary gland, such as a noncancerous tumor or another pituitary disorder, can sometimes cause people who are not pregnant to lactate.

Other causes of galactorrhea include:

In rare cases, people may lactate due to an emotional response to an unrelated baby. One study described a young woman with type 1 diabetes whose nipples produced milky discharge under gentle pressure when she was near an unrelated newborn.

Her symptoms went away when she was no longer near the baby. Doctors ruled out all possible biological causes for lactation. In this case, researchers believe that her lactation was due to an emotional response to the baby.

Sometimes, doctors cannot pinpoint the underlying cause of galactorrhea. In these cases, the condition is called idiopathic galactorrhea.

People with idiopathic galactorrhea might have breasts that are overly sensitive to prolactin, meaning that even normal levels of the hormone might trigger them to produce a milky discharge.

The signs and symptoms of galactorrhea may vary depending on the underlying cause, but they typically include:

Men with galactorrhea may also experience the following symptoms:

Treatment for galactorrhea depends on the underlying cause. Not all cases of galactorrhea will need treating.

In some cases, people can manage the symptoms with lifestyle modifications, such as minimizing nipple stimulation, avoiding tight clothing, and wearing padded inserts inside a bra to soak up any discharge.

Where treatment is necessary, it will center on resolving the underlying cause of lactation. Treatment may include:

A person should never change medications without talking to a doctor first. A doctor will be able to recommend replacements and monitor any potential side effects.

Lactating while not pregnant or breastfeeding is called galactorrhea. It has a variety of causes and associated symptoms.

Staying Positive May Not Cure RA… But Depression Can Worsen Flares
and, But, Causes, Lactating, NOT, pregnant, symptoms
Latest Posts