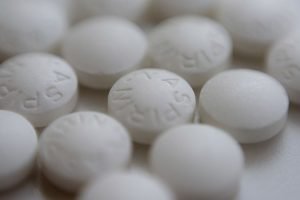 While the drug helps prevent a second heart attack or stroke, according to an ABC report, a new study found that the risks of using the pill every day outweigh any possible benefits for people with a moderate risk. In patients whose risk increased due to smoking, high blood pressure, or high cholesterol, but who did not have any heart disease or a blood vessel-related problems, the aspirin did little in prevention.

In addition, the risk of severe bleeding outweighed any possible protective benefit in people with diabetes. Researchers also found that fish oil supplements, which are also often recommended for heart disease prevention, did not positively affect patients with diabetes. Study leader Dr. Louise Bowman of the University of Oxford said, “We feel very confident that there doesn’t seem to be a role for fish oil supplements for preventing heart disease.”

The lead researcher in one aspirin study, Dr. Jane Armitage of the University of Oxford, said, “There’s been a lot of uncertainty among doctors around the world about prescribing aspirin. If you’re healthy, it’s probably not worth taking it.”

Scientists discussed the various study results on the long recommended product at the European Society of Cardiology in Munich on Sunday. Of note, the studies used 100 milligrams a day tablets as opposed to the low-dose tabs in the United States, which are 81 milligrams. Both doses are lower than the adult strength of 325 milligrams.

Medscape reported that John G.F. Cleland, MD, Imperial College London, United Kingdom said, “We have much better treatments for atherosclerotic disease now than we had in these old aspirin studies.” That detail might be why the newer studies show fewer benefits than previous studies conducted in the 1980s and 1990s.

Overall, researchers believe that patients and their doctors should engage in a dialogue to weigh the potential benefits and risks of a low dose daily aspirin therapy regimen. They think rather than a blanket recommendation, it should be an individualized situation depending on each patient’s profile and specific situation.

Over the years, there have been 100s of studies on aspirin and prevention of cardiovascular issues, and they’ve shaped the current recommendations about use for patients in moderate to higher risk categories. Because there have been so many, one or two studies probably won’t dramatically change the protocols.