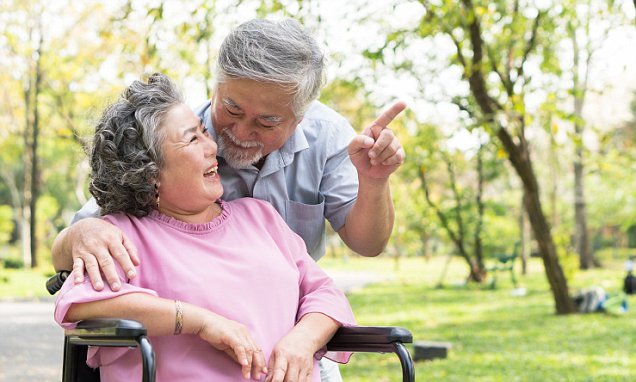 Elderly men make just as good carers as women – but younger males don’t have the time to look after their ill spouses, finds study

Older males spend the same amount of time looking after their ill spouses as females do, a study found.

Yet young men are not as caring towards their unwell partners as women are, which may be due to them having less time to run errands or do housework due to work commitments compared to their retired counterparts, according to the researchers.

The scientists claim their findings are important due to people living longer and therefore requiring greater levels of care.

‘Our findings at least suggest that women won’t have to worry that their partners are not up to the job of caring for them’. 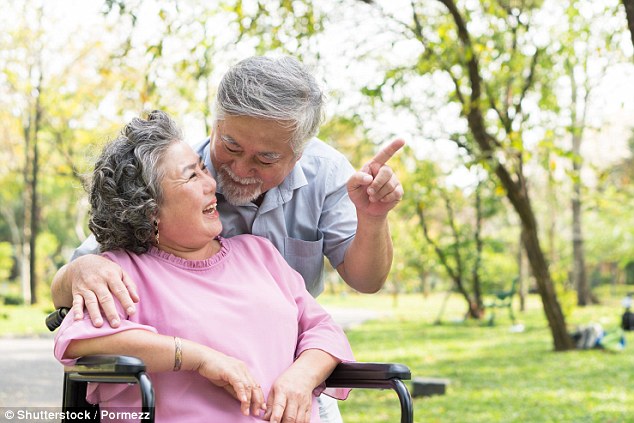 HOW OLD CAN HUMANS LIVE TO?

Research reveals it is possible to slow down our biological, or ‘inner’, ageing process, which could help us to live decades beyond the current life expectancy of 81.

Drugs that interact with our DNA maintain the function of our bodies for longer, the research suggests.

Experts stress, however, this must be combined with a healthy lifestyle for full effect.

Yet, how a 120-year-old life expectancy may impact people’s quality of life is unclear.

The side effects of such treatments are also unknown.

Several European countries are in talks to start drug trials within the next three years.

Professor Vladimir Khavinson, head of the St. Petersburg Institute of Bioregulation and Gerontology, said: ‘It is important to understand that nobody would want to live a long and unhealthy life.

‘The main goal for us now must be to allow people to stay healthy for as long as possible into their old age.’

Six of these drugs are already available in Russia.

These include Thymalin to maintain immune system function and Cortexin to preserve brain activity.

The drugs work on the so-called ‘peptide technology theory’, which states that interacting with DNA increases protein production that prolongs lifespan.

Speaking at the international symposium on longevity in Geneva, Professor Khavinson added: ‘One of the key indicators of ageing is the reduction of protein synthesis.

‘We have come to the conclusion that it is possible to restore it to a normal level with the use of peptide bioregulators and have found an optimal way to maintain natural peptide production of a sufficient quantity.

‘The technology developed by our scientific institute is based on the extraction of peptides from the tissues of young healthy animals that have the same structure as human tissues.’

A similar study conducted by researchers at the GLMED medical center in Moscow assessed 60 age markers throughout such drugs’ treatment in participants aged 31-to-72 years old.

Results suggested that, when combined with a healthy lifestyle, the drugs reduce a person’s biological age by an average of up to two years over 12 months.

The researchers analysed 538 couples from Germany with an average age of 69.

One member of each couple required care from their spouse.

The scientists assessed how many hours the caregivers spent looking after their partners, whether that be responding to their physical needs, running errands or doing housework.

‘Male caregivers are as responsive towards their partner’s illness’

Results suggest men adjust their time just as much as women do when their other halves become unwell.

Perhaps surprisingly, men increase the amount of time they spend on housework and errands more than women when their partners become severely ill.

When a person’s spouse is only relatively unwell, however, women spend more time on housework than men.

Dr Langner said: ‘Our results suggest that gender differences in spousal caregiving in old age are not as pronounced as previously thought.

‘We found that, unlike many previous studies on caregiving in later life – male caregivers were just as responsive towards their partner’s onset of illness as female caregivers.

‘This stands in sharp contrast [to] the division of caregiving (i.e. childcare) and housework in mid-life.

‘There could be a number of reasons for this, but a key factor may be that in later life many people retire and no longer have the responsibility of work, so are able to focus on other priorities – that their spouse may have been doing already.’

This comes after research released in July last year suggested centenarians die in better health than those who pass away in their 80s or 90s.

People who die aged 100 or older have on average 3.3 health complaints at the time of their passing, a study found.

This is compared to 4.6 ailments in those who pass away in their 80s or 90s, the research adds.

Study author Dr Paul Gellert, from the Charité hospital, Berlin, said: ‘Our results also show that the increase in conditions seen during the last few years of life was lower in centenarians than in those who had died between the ages of 90 and 99 or 80 and 89.’

The researchers did not speculate on why centenarians die with fewer conditions, however, it may be that people require good health in order to reach such an age.