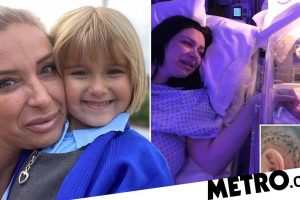 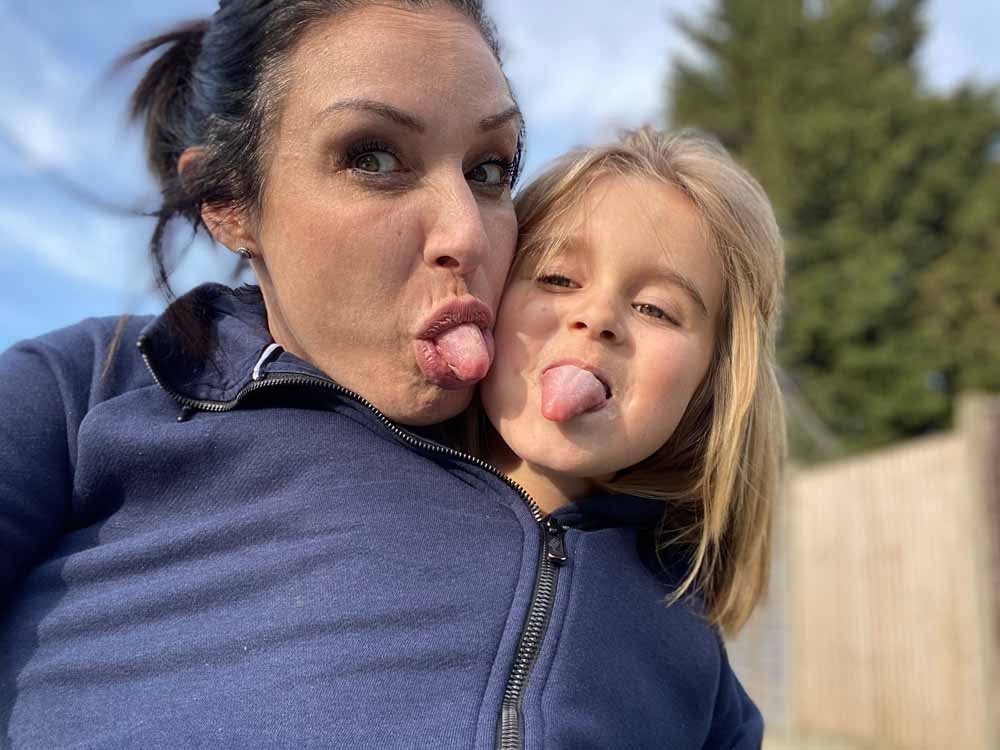 A woman who was advised to terminate her pregnancy by doctors due to an ‘octopus-style’ brain tumour that could have proven fatal has welcomed a healthy baby girl.

Lisa Connell, 42, was diagnosed with an incurable meningioma – a benign tumour of the membranes that cover the brain – in 2006, the year after she had developed double vision during a pregnancy that she, sadly, miscarried.

Medics warned that pregnancy could kill Lisa, but a decade later she gave birth to a healthy daughter – and she credits a psychic medium for her ‘beautiful little girl’.

Full-time fundraiser Lisa, of Northaw, Hertfordshire, said of the news she had the tangerine-sized tumour: ‘I was told I would never, ever be a mum. It hit me hard, I love children.

‘It was terrifying to think that I would never have my own family and do the things I wanted to do.

‘It was horrifying enough to be told that I had a brain tumour, but devastating to also be told that I couldn’t have children, because the pregnancy hormones would “feed the tumour,” putting my life at risk.’

While pregnant in 2005, she experienced blurred vision and was initially prescribed new glasses, but asked to see a specialist at London’s Moorfields Eye Hospital a year later, after hitting her car on a bollard.

By then, experiencing a noticeable squint in her left eye, she was still completely unprepared for her brain tumour diagnosis.

Lisa said: ‘As soon as they said brain tumour I thought I was dying straight away.’

Worse was to come in the following months when the ‘tentacle layers’ in her tumour – which she was told could not be cured – were pressing on and moving around crucial nerves in the brain and caused partial paralysis from her waist down.

Spiralling into a dark mood, Lisa said: ‘I was very depressed and wanted to give up.

‘I’d be paralysed intermittently from the waist down. For two days I’d be paralysed, then my movement would return. I was falling all over the place, and grabbing walls to stay upright.’

Eventually, in 2009, Lisa had Gamma Knife surgery at St Bartholomew’s Hospital in central London, but the procedure was unsuccessful.

Debulking surgery – an operation to reduce the tumour’s size – then took place in 2015, but less than 5% of the mass was able to be removed. Still, this enabled doctors to perform tomotherapy at central London’s St Thomas’ Hospital in 2013, in which radiation is aimed at a tumour from many different directions.

While Lisa’s tumour is benign, it is still life-threatening. And although she has not been told how long she has to live, following recent tests, neurologists at Guy’s Hospital in central London have told her ‘any growth’ could be fatal.

But, in the midst of her gloom, in 2015, Lisa was given a huge helping of hope when she discovered she was expecting a baby with her then partner, Dean Forster, 42, a hairdresser.

She said: ‘I asked Dean to get me a test and when it was positive, I couldn’t believe it. We hadn’t been trying and I never thought this would happen to me.’

Doctors’ warnings about the dangers of carrying a baby loomed large, but Lisa tried to put them to the back of her mind to go an audience with a medium at a local theatre she’d previously booked.

She said that, while sitting in the packed auditorium: ‘The medium pointed at me, pointed at my stomach and told me I was going to be fine – and she was 100% right.

‘Her reaction made me think I needed to go on with my pregnancy.

‘I’m so grateful to her, as I was advised to consider a termination because of my health and if I hadn’t seen the medium I wouldn’t have carried on.’

It wasn’t an easy pregnancy, and at the 32-week scan Lisa was told that the baby had a rare condition called corpus callosum, which had a 50% chance of causing developmental issues.

Still, Lisa and her baby fought on and on March 18 2016, Ruby Forster was delivered by caesarean section at 34 weeks, weighing 4lb 6oz.

Lisa said: ‘She was tiny and remained in the hospital for a further 12 days. But she was absolutely perfect.

‘She was classed as disabled before she was born, but we don’t see much evidence. She’s a relatively normal child.

‘You wouldn’t know any different. She’s dyslexic but she can read and she can write.’

Lisa, who is no longer with Ruby’s dad, is now the proud mum of a five-year-old and loves seeing her daughter – who she calls ‘the most important part of [her] life’ – go off to school in the morning.

At the moment, Lisa’s condition is stable as her neurologists are ‘confident’ the tumour will not grow based on annual scans over the last five years.

The mum-of-one says she’s prioritising making the most of whatever time she has, and has set herself the goal of raising £1 million for research. Ruby has also followed in her mother’s footsteps and loves helping to fundraise with her.