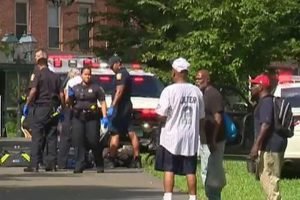 Record number of US overdose deaths in 2017

Over the course of two days in mid-August, more than 95 people in New Haven, Connecticut, overdosed.

Their drug, however, wasn’t heroin. It was synthetic cannabinoids, commonly sold as K2, Spice, or potpourri.

The fallout from the incident was so widespread that experts have referred to it as a “mass casualty incident.”

More than that, it has become a symbol of the dangers of a class of drugs that officials in the United States have little understanding of and even less control over.

In nearby Baltimore, a new study by the University of Maryland’s Center for Substance Abuse Research (CESAR) published this month articulates many of the problems with identifying and treating synthetic cannabinoid overdoses.

They almost immediately hit a snag with their study.

If the patients had been using Spice, why wasn’t it showing up in their urine?

“When we got the results back, it was just kind of amazing because we expected to find a large percentage testing positive for the synthetic cannabinoids metabolites we were testing for, and what we found was that in the first go around only I think one specimen testing positive for it,” said principal investigator Eric Wish, PhD, a principal study investigator and director of CESAR at the University of Maryland, College Park, College of Behavioral & Social Sciences.

Despite testing the urine for 169 different drugs, including 26 metabolites of synthetic cannabinoids, it simply wasn’t there.

These new drugs don’t show up on standard drug tests, making it difficult to form a clear diagnosis.

Designer drugs continually manage to dodge legislation because whenever a certain variety is outlawed based on its chemical structure, a new similar chemical is manufactured and sold legally.

“While the press and the media talk about Spice and K2 like it’s a single type of phenomenon, the truth can’t be further from that,” Wish told Healthline. “Basically what you have is some chemist in another country, oftentimes the DEA says it’s China, who waits and they see what has been put on the prohibited list by the government. And then they go ahead and they tweak the molecule a little so it’s no longer on the prohibited list and then they make it available.”

One year later, researchers implemented an updated drug-test panel that increased the number of synthetic cannabinoids from 26 to 46.

Even with this improved panel, only about one-quarter of the samples tested positive.

The study also highlights several other findings that could potentially help improve immediate care for individuals overdosing on newer drugs at emergency departments as well as future public health initiatives.

For instance, where a patient lives can foretell what drugs may be in their bloodstream.

Researchers saw that in patients at Prince George’s County. Nearly half of them also tested positive for the hallucinogen PCP.

Those at the Midtown Campus hospital were far more likely to have cocaine and fentanyl in their bloodstream.

“The study provides public health officials, provides patients themselves, an understanding of the risks that they are exposed to,” said Dr. Zachary D.W. Dezman, an assistant professor of emergency medicine at the University of Maryland School of Medicine.

Fentanyl, a powerful synthetic opioid, is increasingly showing up across the United States with deadly results.

In this study, researchers found that among all substances, fentanyl was the most likely to be found in combination with multiple other drugs.

In some specimens, it was detected with as many as 12 others — indicating that users either aren’t aware what is in their drugs or that users of fentanyl are regularly using many different drugs simultaneously.

People “want to know what they’ve been exposed to,” said Dezman.

“I’ve had a number of patients who once they were told they were fentanyl positive… started to seek treatment,” he added.

Such is the deadly reputation of that drug.

Currently, fentanyl doesn’t show up on common “dip tests” used in hospitals, but Dezman hopes that will soon change.

Synthetic cannabinoids, fentanyl, and synthetic cathinones represent a new challenge for members in the healthcare community to identify and treat, but by understanding which drugs are being used in which communities, better education and treatment options can be developed.

“We can track people down to a particular area code, and that allows us to do things like create, potentially, a mobile van for education efforts to educate the neighborhood on the dangers they are being exposed to, signs to look out for an opioid overdose, distribute naloxone, and potentially also start a mobile opioid maintenance therapy van [to provide] methadone or Suboxone,” said Dezman.

What to eat before a workout and when to eat it
are, diagnose, difficult, drug, it, making, new, overdoses, strains, synthetic, to
Latest Posts