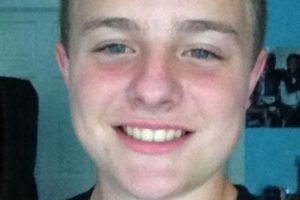 Eric Aarseth died after suffering pneumonia that turned septic, according to his family.

A young firefighter in Oregon was taken off life support after suffering “irreversible” damage to his organs while battling wildfires, his family says.

Eric Aarseth, 20, suffered from pneumonia that turned septic, KATU reported. He died early Tuesday morning, according to a memorial page created by a family friend on his behalf.

The 20-year-old was working for Miller Timber Service at the time of his death. A spokesperson for the company told KATU Aarseth was “part of a hand crew who dug fire containment lines and help with fire mop-up duties.”

In July, he worked to battle the Garner Complex Fire in the southern part of the state before battling the Horns Mountain Fire in south Washington — the most recent fire he worked to contain.

But little did Aarseth know it would be his last.

The day after he returned home last week, Aarseth’s roommates found him unconscious. He was rushed to the hospital, where doctors determined he had developed pneumonia which had turned septic.

"He thought he was OK, and kids at that age tend to be tougher. They don’t want to admit they’re sick, they don’t want to go to the doctor," Cheryl, Aarseth’s stepmother, told the news station.

The firefighter was taken off life support on Monday before dying early the next morning.

“Our hearts are heavy today mourning the loss of our firefighter, Eric Aarseth, who passed away. We stand with his family and friends who are saddened by this loss,” Miller Timber Service said in an online statement. “It’s devastating to lose any member of our team and Eric seemed to have found his passion and purpose on the fire line. We’ll share memorial information as it’s available.”

In fact, “respiratory morbidity predominates, but cardiovascular, ophthalmic and psychiatric problems can also result. In addition severe burns resulting from direct contact with the fire require care in special units and carry a risk of multi–organ complications,” the National Center for Biotechnology Information said in a 2012 report.

Octavia Nightingale, who created the memorial page for Aarseth, said funds will be used “for a good cause in making sure that in the future such tragedies can be avoided," adding she wants to make sure doctors thoroughly examine – and clear – firefighters after they come off the line.

“If Eric had been checked out prior to leaving, the doctor would most likely have sent him directly to the hospital,” she wrote.

"He may not have died out there in the fire, [but] he’s still a hero," Cheryl said. "He lived the way he wanted to live and he was very determined to do what he wanted to do and help people no matter what the cost was."