Sidewalk Chalk, Music, and Teddy Bears: How People Are Lifting Others’ Spirits During COVID-19 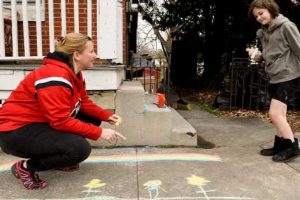 Randy Veraguas is making new friends around her hometown of Hull, Massachusetts.

That might sound strange, since the COVID-19 pandemic has sent most of the Boston suburb into isolation.

Veraguas is taking pictures from a distance of families in her seaside town posing on their porches.

“I’ve shot about 16 families. Some have literally been my family, some my friends, and others who were complete strangers who I’d now call friends,” Veraguas told Healthline. “This is a real win-win. The families win because they have something to look forward to and a reason to wear matching clothes and brush their hair. And charities win because, in lieu of paying a photographer for their picture, the families are asked to make a donation to a charity.”

Veraguas isn’t alone in her efforts.

The stresses and isolation of the COVID-19 shelter-in-place orders are prompting many people to find ways to bring cheer to the lives of others.

Krasinski, in fact, has garnered more than 14 million views for the first episode of his “Some Good News” videocast.

Musicians, from Coldplay singer Chris Martin to a young pair of violin-wielding brothers in Italy, are performing for audiences from their living rooms and neighborhoods.

While a dangerous virus is putting life on hold for at least a few months, there’s still lots of goodwill out there.

“People, in general, are just taking time to appreciate each other and find creative ways to make others smile,” Elaine Ducharme, PhD, a clinical psychologist in Connecticut, told Healthline. “I see lots of neighbors reaching out to others, especially seniors, to see if they need help with shopping. The internet has allowed us to share positive stores and pictures that make us all smile.”

Ducharme pointed out that people still rant online, but there are still plenty of positive messages out there.

“I am seeing so many more posts stressing that we are all in this together. We are all humans and none of us is immune,” she said. “I really think Americans are showing their best side in the darkest of days.”

These projects are showing up in windows and on sidewalks all over the world, aimed at those who are sick, getting over being sick, or working long hours to help the sick.

“We’re chalking my brother’s neighbor’s driveway,” said Diana Luna, who was taking vacation hours from her job at the Lawrence Livermore National Laboratory in California for the family art project. “She’s a nurse at Kaiser and we’re putting out messages of support.”

Luna drove one of 14 decorated cars past a friend’s house last week to give her a surprise birthday parade.

Some of the celebrants wore clown noses, and each deposited a bottle of wine in a large box outside the birthday girl’s Livermore home.

Thousands are keeping children entertained by placing stuffed animals in windows or on front porches as part of teddy bear scavenger hunts with discoveries ending up on designated web pages.

“I didn’t have a teddy bear, so I put a stuffed sloth in my window,” said Luna.

He’s using his connections as an assistant coach for a number of the school’s sports teams to start a Facebook page called Tri-Valley Community Help During Shelter in Place.

“It started off with maybe helping someone who has to stay inside get prescriptions. It went from that to helping a family of three who can’t work, to this,” said D’Ambrosio, who is still teaching classes via videoconference.

D’Ambrosio spoke to Healthline while juggling phone calls. A mortuary had just asked for help tracking down masks for workers transporting patients who died from COVID-19.

Within 5 minutes, D’Ambrosio found someone to deliver 30 masks to the mortuary within 24 hours.

“Which is nuts, but that’s how it works,” he said.

D’Ambrosio wanted to feed local medical workers. That can be difficult since hospitals generally frown on food deliveries.

D’Ambrosio also fired up his group to paint rocks and signs to place around the hospitals to encourage workers.

“There are so many stories I could tell,” D’Ambrosio said. “Every day it’s something else.”

Nancy Molitor, PhD, a clinical psychiatry professor at Northwestern University in Illinois, said it’s important to foster connection during what she called “the most intense, elongated period of stress I’ve ever seen.”

“I just got off the phone with someone who is helping make face masks. She’s in a weaving group, and they got the specs and they’re making thousands of beautiful face masks to help hospital workers,” Molitor told Healthline. “It reminds me of the wonderful, positive nature most humans are capable of. We’re wired for social connection.”

“People are showing incredible ingenuity,” she added. “There are so many ways people are figuring out how to connect while playing within the rules.”

Veraguas is making so many new friends, she’s decided to take the Front Porch Project — which was inspired by #TheFrontStepProject in nearby Boston — to local businesses as well.

“I was not anticipating everybody being as excited as they were when I showed up,” she said. “Women had their makeup on, and the little girls and boys were very excited to see me.

“It’s a nice, quick human connection and gives me the warm and fuzzies to be part of this,” she added.

Parental life span predicts daughters living to 90 without chronic disease or disability: Results show a 25 percent increased likelihood of living longer and healthier if mom lived to age 90 and a 38 percent increase if both parents did