Home » Health News » Texas Mom Speaks Out After Almost Dying from Vaping-Related Illness: 'My Lungs Were Full of Fluid'

Texas Mom Speaks Out After Almost Dying from Vaping-Related Illness: 'My Lungs Were Full of Fluid' 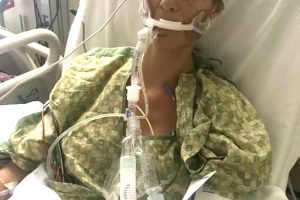 Sherie Canada had never been a smoker, but the flavorful taste of e-cigarettes lured her in.

“I tried it and liked the flavors it had to offer, and then got addicted to the nicotine in it,” the Texas mother-of-three wrote in a candid testimonial about her experience with vaping.

Canada was inspired to share her story after she had to be hospitalized and put in a medically-induced coma, almost dying from multifocal pneumonia, severe sepsis, and acute respiratory failure with hypoxemia (ARDS) — all of which she said were caused due to her vaping habit.

“I got very sick around June 9th with stomach flu like symptoms,” she wrote on Facebook on Sept. 6. “I couldn’t hold any fluids down, I took everything you could imagine over the counter, tried drinking fluids but couldn’t keep them down, I was severely dehydrated.”

Days later, on June 12, she was rushed to the hospital with low oxygen and blood pressure levels.

“[Doctors] did a cat scan and showed my lungs were full of fluid and blood test positive for blood clots,” Canada said. “I was so scared but more than anything in so much pain.”

Her condition continued to deteriorate despite doctors’ best efforts, so she was taken to the ICU, and on June 18 doctors made the decision to put her in a medically-induced coma.

“I was absolutely terrified that I was never going to wake back up and see my boys, family, or friends again! I remember leaning over to my mom telling her just how tired I was of fighting and just couldn’t fight no more,” she said.

While she was sedated, doctors removed four liters of fluid from her lungs and she was brought out of the coma two days later. Canada was placed on a ventilator for three days afterwards and wrote that she “woke up a whole new woman with a whole new perspective in life that is for sure,” she explained. I “promised I would do life better and different, and that I would never take advantage of my lungs, a breath again.”

RELATED: How Dangerous Is Vaping? E-Cigarette Users ‘Should Worry’ About Rise in Lung Illnesses, Says Expert

Doctors diagnosed her with ARDS, Canada said in a YouTube video that accompanied her Facebook post. According to Mayo Clinic, ARDS “occurs when fluid builds up in the tiny, elastic air sacs (alveoli) in your lungs” which then can inhibit your lungs from filling with enough oxygen, depriving your organs of the oxygen they need to function.

“You have no idea of how precious [lungs] are until they aren’t yours anymore and a machine is telling them to breathe for you,” Canada wrote. “I had so much shame, guilt, and anxiety. I lost my independence [which] I had taken for granted. I couldn’t go to sleep for days after they removed the tubes because I feared waking back up and going through it all over again.”

As of Sept. 20, there have been eight reported deaths due to a severe lung illness linked to vaping.

The Centers for Disease Control is currently investigating 530 confirmed and likely cases of severe lung disease linked to vaping. The federal agency said that they will continue to work with the Food and Drug Administration to determine the safety of e-cigarette use, though they previously urged Americans to stop vaping as they conduct their investigation.